The Area 51 Mutations were the monsters that were kept in Area 51. They include: the Throny Devil, the Giant Armadillo, the Desert Lizard and the Desert Rat. This is also why the government tries to keep away civilians and news reporters, though they were telling the truth about no aliens. The Giant Armidillo wasn't very strong and was stopped just by luring it into a large tree, where it became entangled in its gigantic roots. The Thorny Devil was very powerful, as it's indicated it shot out multitudes of thorns from a concealed portion of the back of its neck, which were highly poisonous (as each thorn contained venom roughly the same amount as 20 scorpion stings), and were dangerous even to Zilla. After launching the thorns, the Thorny Devil would very quickly regenerate another batch of thorns It's hide was also too strong and armored for Zilla's radioactive fire breath, but he was able to flip the Throny Devil over and kill it by burning its vulnerable chest and underbelly. The Throny Devil may be a possible homage to Anguirus.

The strongest of all the mutations caused by the underground nuclear testing of the 1950s and 60s, the Thorny Devil is a force to be reckoned with. Covered in armor and armed with poisonous spikes, it broke free of the underground environment along with the Giant Armadillo. While the armadillo was captured before it could break free, the Thorny Devil remained under the soil, trying his best to burrow away. Randy and Dr. Kirk, the base’s overseer, came across the creature and soon a battle would rage.

When the others came to the rescue, the Thorny Devil crushed their jeep and attacked with its spikes. Luckily Godzilla was in the area and burst from the ground, ready to due battle yet again! Not even Godzilla’s atomic fire could penetrate its thick armor and soon the great monster king was put down by the devil’s toxic spikes. Seeing its chance, the creature made a move for the gates, ready to ram them as the humans tried to think of a way to stop it.

Randy came up with the ingenious idea of using destroyed parts of the jeep to quickly make a land sail and catch up with the mutation. Armed only with a tranquilizer gun, he soon got the chance to use it as he passed the behemoth on his quickly made transport. The tranquilizer amount, however, wasn’t enough to knock the monster out…

It fired back, pinning Randy to the wall with its spikes and then carried on, ramming through the huge gates. Before it could fully exit, however, Godzilla emerged for a second round! This time he managed to flip the mutation onto its back and fire on the softer flesh of the belly. The Thorny Devil screamed in pain before its entire body was engulfed in fire. 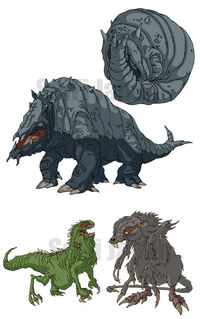 During the 1950s, dozens of underground nuclear tests took place in the site known as Area 51. The resulting tremors and flashes of light made the locals believe that aliens were landing, and when the monstrous beasts created by the bombs showed their ugly faces, the government used the UFO fanatics as a cover up to hide what was really going on. One of the mutations spawned was a massive armadillo. Housed underground, the creature broke free one night along with the Thorny Devil. On the outside, but still within the compound’s huge walls, the creature wandered aimlessly before running across two men whom broke into the base, expecting aliens.

They managed to get the creature on film, but it was out of focus. While many believed it was some sort of alien, H.E.A.T. managed to fix the picture quality and reveal the hideous monster’s face. Once traveling to the base and meeting up its commander, H.E.A.T. came face to face with the mutation.

Dr. Candace Kirk, the runner of the base, had her men use electrical beams on the creature, but it immediately took a defense position. When she too tried the attack, it suddenly leaped into the air and came down on their jeep, crushing it. Now it was H.E.A.T.’s turn to take a crack at the armored mutation. They came up with a plan to use the roots of one of the area’s massively overgrown trees, possibly spawned by the atomic blasts also, to entangle the creature. As the monster was distracted with gun fire, the roots were exposed via explosives. Getting the beast’s attention, Randy rushed for the net-like roots and dove in. The creature was quickly caught and trapped in the vine-like roots. Unable to move, it was then transported back to the underground mutation reserve.

Other mutations spawned by decades of underground nuclear testing, the lizard and six-legged desert rat mutations were at home in the underground Area 51 reserve for mutations. Along with other creatures, such as the Thorny Devil and Giant Armadillo, they were studied for beneficial uses for mankind.