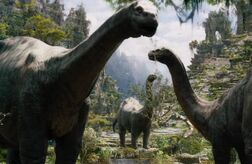 Apatosaurus, also known by the popular but scientifically redundant synonym Brontosaurus, is a genus of sauropod dinosaur that lived from about 154 to 150 million years ago, during the Jurassic Period (Kimmeridgian and early Tithonian ages). It was one of the largest land animals that ever existed, with an average length of 23 m (75 ft) and a mass of at least 23 metric tons (25 short tons). The composite term Apatosaurus comes from the Greek names apate meaning "deception"/"deceptive" and sauros meaning "lizard"; thus, "deceptive lizard". Brontosaurus comes from bronto meaning "thunder" and sauros meaning "lizard"; thus, "thunder lizard". Othniel Charles Marsh gave it this name because he regarded the chevron bones as similar to those of some mosasaurs, members of a group of prehistoric marine lizards.