Clover (クローバーフィールド?, Kurōbāfīrudo) is a kaiju created by Paramount Pictures that appeared in the 2008 film, Cloverfield.

Clover does not have an official name, but fans call him "Clover" from a shortening of the movie's name. The crew members referred to it by its nickname 'Clover,' while it is not named at all in the film. It is referred to mainly as "the monster," or "the Cloverfield Monster."

The monster is 350 foot high, quadruped and possesses a long fork-finned tail. The uppermost triple-jointed limb pair are longer than the other 2, ending in a multi-fingered hand which can bend backward so that the creature can walk on its knuckles. The double-jointed, squat legs are powerful enough to support the creature’s mass, and yet still allow it to move quickly for an organism of its size. Each of its feet is 30-40 feet in length, roughly the size of a city transit bus or a Tyrannosaurus Rex. The creature is covered in grey skin that exhibits a white pallor. The skin is also host to an indeterminate number of relatively smaller parasitic creatures.

The Monster's diet covers a large array of foods. The first hint at the monster's diet was when a photo of whales the monster had partially consumed appeared on 1-18-08.com. During Cloverfield, Marlena says she saw it "eating people". The exterior esophagi are the right size to consume humans among other things. Other amateur video footage of Cloverfield reveal that the Monster was also seen eating horses, multiple ones at the same time. Its head has sharp, bony features and two eyes with pupils large enough to almost obscure their requisite sclera from view. There are a set of membranous sacks on either side of the head behind the eyes, which inflate and recede back into the head, perhaps in time with its respiration.

The creature has a high resistance to projectile weaponry. Shells from M-1 tanks, AT-4 rockets, 80 Mk 82 bombs and other high powered ordnance failed to do anything other than aggravate the creature.

According to film producer J.J. Abrams, the creature is "a baby. He's brand-new. He's confused, disoriented and irritable. And he's been down there in the water for thousands and thousands of years."

The Monster's origins are unknown, but many people speculate that it is of extraterrestrial descent, even though this has been denied by J.J. Abrams. In the scene where Robert Hawkins, Lily Ford, Marlena Diamond, and Hudson Platt are walking though the subway Hud says to Rob "Dude, think about it the ocean is huge." talking* about the monster's origins. This could connect to Abrams saying the monster is from the ocean. Abrams wanted the movie to be realistic; if a monster did attack we would have no idea where it came from unless we witnessed it.

After many military attempts at bombing the monster and creating much devastation in Manhattan, the creature's fate is still yet to be revealed.

Many argue that an audio clip at the end of the credits in the film said the words "Help Us" but it is in fact "It's still alive," only backwards.

However, recent interviews with J.J. Abrams tell us that the bombing kills the monster.

Clover has outstanding physical capabilities, even though he is doing it out of fright and defense his body has adapted to harsh conditions especially undersea pressures. He also seems virtually invulnerable to most forms of weaponry that humanity can throw at, (including a bombing run from a B-2 bomber) and can stand back up from the power in a few seconds. During the movie it was shown that he is indeed strong enough to rip the statue of Liberty's head off and throw it with ease like a baseball.

Clover was also covered in 2,000 parasites that are about the same weight and height as a dog. They have 10 legs, consisting of six spider-like, double jointed legs and 4 "pincers" on the top and back of its body. They have very large jaws, pale grayish skin and many black eyes. They closely resemble a giant spider. The Department of Defense called the parasites "HSP", for "Human Scale Parasite". The Department noticed how the parasites attack with pack coordination, and prefer enclosed spaces for trapping and surprising prey. They can also detect prey from afar, by an unknown method.

Marlena Diamond is killed by a parasite's bite in the film. The bite in the subway caused Marlena to bleed from the eyes and vomit blood from the mouth. Before Marlena explodes, a soldier is wheeled in by the group, his chest having a gaping hole, and the medical officers saying "another bite", foreshadowing Marlena's fate. 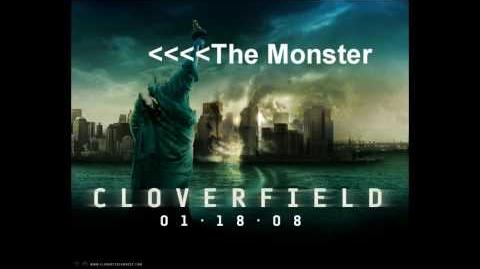