Guilala is an alien kaiju from outer space.

A species of kaiju created by the explosions of stars, Guilala was made out of a special form of condensed energy normally found in little contained spores. An unknown alien race once attached spores to a space ship from Earth. One spore was carried back and the guilalium was taken off. The spore broke open and Guilala came out and grew to monstrous proportions! It destroyed most of Japan in the search for energy. Lured by powerful nuclear energy to the Mt. Fuji spaceport, but was covered in guilalium. Blocked from the energy all around, Guilala became a spore again, and was sent on a rocket to orbit the sun forever.

Eventually, another UFO crashed to Earth, bringing yet another Guilala to the planet during the time of a G8 Summit. Realizing the danger of the creature, the president of the United States of America convinces the other world leaders to personally fight back against Guilala instead of fleeing, and each country decides to use their own secret weaponry against the beast. A North Korean general plans to destroy the Guilala with a nuclear missile, but he has been warned that if he did it he will spawn hundred, even thousands of Guilalas. However, the monster is not rendered successfully taken care of until two Japanese journalists discover the legend of Take-Majin, a god which must be awakened to save mankind from the monster. This attempt finally succeeds and Guilala was defeated for a second time.

Like a lot of kaiju, most human defenses just bounce right off of him. However, he seems to be a bit better at blocking attacks then most kajiu. He once demonstrated these skills when taking a direct hit to the head by a kamikaze jet without even flinching. Not only does he have strong defense, but strong offense. His striking skills are average, but he does have some original attacks. He can launch fireballs out of his mouth, absorb energy to become stronger, and even turn into a ball of energy to move from one place to the other while destroying everything around itself. Even though he has strong attacks and a tough hide, he is still very fast. 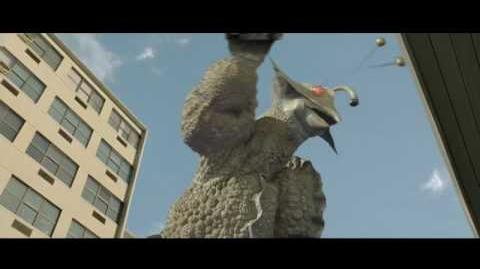