The Legion (レギオン?, Region) are extraterrestrial silicon-based kaiju created by Daiei that first appeared in the 1996 Gamera film, Gamera 2: Advent of Legion.

The Legion gets their name from a comment a soldier made in the film; quoting the Bible, "And Jesus asked him, 'What is thy name?' He replied, 'My name is Legion, for we are many.' Mark 5:9"

The Symbiotic Legion, as noted in the movie, are a silicon-based alien lifeforms. Legion's exterior greatly resembles that of an insect, especially that of a Rhinoceros Beetle. The Legion do not actually have muscles. Instead, they are able to move through pressurized gas that passes through their seemingly hollow exoskeleton. Their reproduction is unknown except for the fact that they spread through an enormous pod that they fuel with oxygen to ignite a massive explosion to launch their species throughout the galaxy.

The Queen Legion's body structure is similar to crustaceans. Her body tissue is based on silicon and has a semiconductor like structure. She is durable, able to withstand a frontal assault from the Japanese SDF and resist Gamera's Mana Blast for several seconds. She does in fact have usable insect-like wings that give her the ability to fly, despite her enormous size. On the Queen sports multiple egg-cases in her abdominal region which house Symbiotic Legion Soldiers which she can dispatch at will. If the workers are not enough to protect their pod, she will guard its location. Usually, the Queen's eyes turn red when she is angry.

The Symbiotic Legions are invaders from the outer recesses of the galaxy, who wanted nothing more than to turn our world into one they could survive on and use as a base to spread their species across the galaxy. They made their first base in a large train station in Sapporo where they became very hostile to anyone or anything that held or contained glass. The soldiers attacked and killed several train riders, including the driver, who were carrying any sort of object that had glass. The survivors were escorted out by special forces but the entire building was soon devastated by a massive flowering object protruding out to the sky. It was soon discovered that this was a seed that the Legion wanted to blast into space to spread their species. They break down the silica in the glass in a chemical reaction that releases oxygen, which is highly flammable and would easily be able to launch their seed into space if the concentration were to be high enough. Gamera quickly realized this threat to his planet and he shot off to engage the Legion. He quickly and seemingly effortlessly destroyed the flowering structure but the enraged Legion Soldiers swamped his body and dealt heavy damage to his skin with their sharp limbs. Suddenly, for some strange reason, the Legion Soldiers abandoned their attack on Gamera to swarm a nearby transformer. Seizing the opportunity, Gamera took to the skies in his spinning saucer flight tactic, spraying blood all over the city from his fresh wounds. However, though Gamera escaped, he would surely face the Legion again. Gamera was unable to realize the growing terror he was leaving in his wake.

Eventually the Queen Legion emerged from the earth, attempting to raid a new region and plant another of her species' strange reproductive flowers. Soaring into the sky with her massive insect-like wings, she flew over the clouds in the moonlight to her next destination. However, the military would never let her get away cleanly, dispatching two F-15s to pursue this new horror and put an end to her nefarious plans. The two missile-equipped jets quickly took out the Queen Legion but the body was never fond. All they could recover to prove the incident ever happened was a massive wing floating along the currents of the ocean. It was assumed that she escaped alive.

The Legion soon resurfaced in Sendai to try once again to unleash their pod. Fortunately, Gamera arrived in an attempt to subdue the flowering invader. The citizens of the city were immediately evacuated through transport helicopters in the airfield. When Gamera tried to reach the pod, the Queen Legion emerged to keep him at bay. With a single helicopter still unable to takeoff, Gamera was forced to hold back against the Legion Queen as he attempted to by the passengers time to escape. The helicopter eventually made it into the sky but Gamera was brutally injured by Queen Legion's dagger-like limbs and powerful EM beam. With Gamera nearly defeated, the Queen Legion soon took her leave, for the gargantuan flower that lay in the city's center prepared to launch its seed into space at any moment. Gamera quickly realized the futility of a conventional assault, so he sacrificed his body to prevent the seed from escaping into space. Due to the extreme oxygen levels that the Legion Soldiers produced for the release of their pod, the resulting reaction decimated the entirety of Sendai in a blazing fireball, leaving nothing but a chard crater where the city used to be, with Gamera's burnt body laying motionless in the center.

Meanwhile, the failure of the previous Legion Flowers signaled desperation in Queen Legion's cold, calculating mind. She began to head to the base of Mt. Akayuka, determined to make a final flower. The J.S.D.F. however, was bent on taking down this invasive creature once and for all. This proved to be a near impossible task for their limited arsenal, for the Queen's massive EM beam was far to powerful, and she continued to eradicate the military resistance untested. All seemed lost to the Earth but, as the Queen Legion progressed through the barriers, efforts were made to revive the Guardian of the Universe. Several believers in Gamera, including the young lady he bonded with in Gamera: Guardian of the Universe, Asagi Kusanagi, came to him and attempted to revive his supposed corpse. They released sparks from a roaring fire around his body and he soon began to absorb the fiery energy. He shed the chard shin that was burned in the explosion and roared to life, eager to defend the Earth against the Legion once more. The Queen, sensing her enemy's presence, sent out a swarm of Symbiotic Legion Soldiers to intercept the heroic turtle, but the creatures were attracted to a nearby transformer by using the frequency the creatures use to communicate. When the mob assembled upon the transformer, an air strike was sent to eradicate them in a single blow. Missiles were fired and the soldiers were completely destroyed on contact. This left the Queen Legion alone to wage war against her mortal enemy, Gamera.

Gamera landed with great speed and slid across the landscape as he fired his plasma fireballs at the Queen at a fairly rapid pace. However, these shots proved useless against the Queen Legion's electromagnetic shield, which seemed to destroy the very ions that kept Gamera's powerful fireballs intact. This near impenetrable shield generated by the Queen's many spear-like arms forced Gamera to attempt a more physical assault, one that could easily be thwarted by her massive EM beam. Luckily, air support managed to rend a few of Legion's arms from her body, and the shield weakened enough for Gamera to get in close and attack. After Queen Legion fired its powerful EM beam, Gamera seized the opportunity of her weakness and attack her opened nasal horn. Even though it steamed with the heat given off by the EM blasts, Gamera pushed through the pain and tore of both portion's of her massive horn, stunning the Queen in agony and sending her plummeting to the floor in shock. Though it seemed as if Gamera had gained the ultimate advantage, the Queen had not been defeated. Her silenced eyes flashed back to life in a fiery crimson as the beast rose in rage, intent on ending Gamera and everything he stood for. Deadly laser whips of the same color as the Queen's seething eyes swirled from her forehead and lashed out to stab at Gamera and everything around him. These sharp blades of energy made short work of the guardian and easily pieced through his skin and shell. There was no escape. The Queen Legion continued to move foreword towards her destination, attempting to end Gamera with every lash of her spiraling energy whips. Gamera had no choice if he wanted to save the planet: he would have to absorb some of its mana. Circular beacons of energy began to converge on Gamera's position and rain down upon him, granting the guardian the strength of the entire planet. His chest opened up and an enormous beam of pure mana energy materialized, blasting foreword to intercept the Queen Legion. The Queen of the extraterrestrials was unable to handle the immeasurable power of this mana blast and she was vaporized, blasted clean through by this final attack. With that, the Legion's reign of terror was finally put to a screeching halt; the world was safe once again. 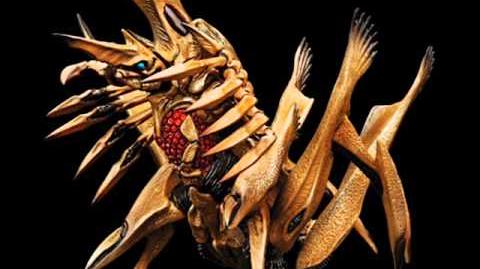