Shockirus (ショッキラス?, Shokkirasu) are mutated sea louse kaiju created by Toho that first appeared in the 1984 Godzilla film, The Return of Godzilla.

Shockirus resembles marine arthropods like the horseshoe crab with its multiple legs and hard shell. Its shell has many bumps, and it has a two-pronged spike tail.

In the The Return of Godzilla manga, the Shockirus look like giant cockroaches.

The Return of Godzilla

Shockirus are extraordinary jumpers, and also can suck vital fluids out of a host. Their hard carapace also protects them from harm.

Shockirus appears in the Dark Horse Godzilla comics where it attacks Kino and Take' when they climb up Godzilla. A creature resembling Shockirus appears very briefly in IDW's Godzilla: Rulers of Earth #1. 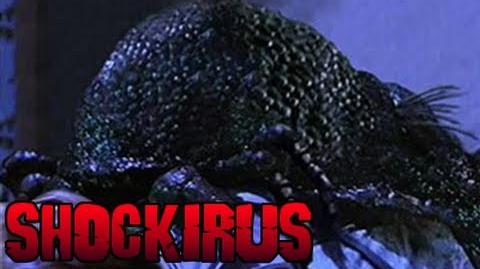