The original English name given to Anguirus by Toho was "Angilas", given the pronunciation of the name in Japan, which was changed to Anguirus in the 1959 American release of Godzilla Raids Again, with the film's title being changed to Gigantis, the Fire Monster. In the mid-1990's, Toho copyrighted the revised name "Anguirus," making it official.

FinalAngira Anguirus's design, dubbed FinalAngira, has many differences from the previous ones. While distantly resembling the 1955 body, he was given a heavier build, as well as spikes on his arms and legs. The head of this Anguirus also has a wider head and lost its crocodile-like snout.

He has a pig-like nose with a short horn, and the six other horns are now seven, most strange in his appearance is that the middle horns are reduced. The eyes and forehead are now pressed more forward. The spikes of the carapace are pointed forward (most noticeable is that they're in straight rows, much like the 1955 version), and the tail is given a tail club, a feature more accurate to real Ankylosauruses.

The mouth has smaller teeth, and the fangs are smaller and not as prominent.

Anguirus was portrayed through suitmation.

Anguirus common roar starts off as a loud shriek. In 2004, tiger growls as well as a few walrus growls were added. 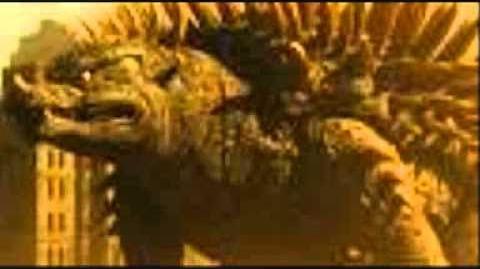 Anguirus within the Millennium continuity is depicted similarly to his Showa counterpart, being shown as a very tenacious and fierce fighter, even against Godzilla who is much larger, and much more powerful than he and his allies are.

In Godzilla Raids Again, it is suggested that Anguirus is a relative of the dinosaur Ankylosaurus that lived around the same time as Godzilla. Like Godzilla, Anguirus managed to survive into the modern day by lying dormant somewhere, presumably underwater, before being awakened and irradiated by nuclear bomb tests in the 1950s. This origin is never discussed further or contradicted in subsequent films, including Final Wars.

Anguirus was under the control of the Xiliens and was sent to China and attacked Shanghai. He was attacked by the Karyu, but he proved too fast for it. He continued to fight against the humans, but he was recalled by the Xiliens on their commander's orders.

Once X killed the Controller and led the Xiliens himself, Anguirus was brought back to Shanghai, and destroyed the Karyu after slamming into it after curling up. After Godzilla was freed by the Gotengo in Antarctica, Anguirus was deployed to the Japanese countryside with Rodan and King Caesar by the Xilien UFOs α, ß and γ, and waited to encounter Godzilla.

When Godzilla arrived, Anguirus almost immediately curled up into a ball and tried to ram Godzilla, but Godzilla used this to his advantage, kicking Anguirus into King Caesar and Rodan. After successfully knocking all three monsters unconscious, Godzilla stacked them into a pile and continued to follow the Gotengo to Tokyo.

Perhaps his most notable and recognizable feature, Anguirus has numerous, sharp spikes all over his shell-like carapace. This carapace can protect Anguirus from enemy attacks and inflict damage if Anguirus slams his back into an opponent.

Due to his quadruped appearance, Anguirus is a relatively fast and agile monster. Additionally, he is capable of leaping incredible distances.

His "rolling" attack, was introduced in the video games and later incorporated in his appearance in Godzilla: Final Wars. In the movie, Anguirus is able to curl himself into a thunder ball and roll around to knock down structures and other monsters. In the former game, Anguirus' rage attack involves him charging his spikes with some undefined energy, then jumping far up into the air, shooting them off while performing multiple flips. In the latter, it is simply a more powerful variant of his rolling attack.

In the video games Godzilla: Destroy All Monsters Melee, Godzilla: Save the Earth and Godzilla: Unleashed, Anguirus is finally given a "sonic roar", a roar which is loud enough to hurt monsters and destroy military weapons. It can also destroy, and even pass right through, buildings and rocks.