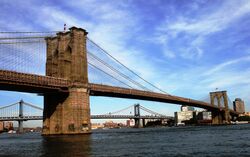 The Brooklyn Bridge is a famous suspension bridge located in New York, which spans the East River and connects the boroughs of Manhattan and Brooklyn. It plays a prominent role in the climactic scene of the 1998 American Godzilla film, GODZILLA.

After Godzilla's nest in Madison Square Garden was destroyed by the military and the creature's offspring all killed, Niko Tatopoulos and his allies were confronted by the vengeful adult Godzilla, who suddenly emerged from the street. Nick and the others quickly jacked a taxi cab and tried to drive away from the monster, which furiously chased them across Manhattan. While fleeing Godzilla, they made contact with Major Hicks, who told them to lure the beast to the Brooklyn Bridge. The cab drove to the bridge, with Godzilla in hot pursuit. Godzilla snatched the cab in his jaws, but using a stray electrical cable the passengers were able to shock Godzilla's mouth and cause him to release them. Freed, the cab drove onto the bridge, with Godzilla becoming entangled in the bridge's cables behind them. Hicks called in three F-18 Hornets to eliminate the trapped Godzilla. The jets arrived and unleashed their payload on the helpless beast, causing Godzilla to roar in agony. After multiple repeated direct hits from the jets' missiles, Godzilla collapsed onto the bridge's deck, dying of his wounds. As countless onlookers surrounded the fallen beast, Godzilla looked sadly into Nick's eyes before finally dying, triggering a celebration across New York City.

In the first episode of Godzilla: The Series, a recap of the ending of the 1998 film is shown, with Godzilla chasing the cab onto the Brooklyn Bridge and dying after multiple direct hits from F-18 Hornets. After Godzilla is killed, Nick approaches Major Hicks and informs him that it is possible that one of Godzilla's offspring could have survived the destruction of Madison Square Garden, and that they should go investigate the ruins. Hicks agrees, and he, Nick and a group of soldiers leave the area to go investigate Madison Square Garden.

After Clover rampages through Lower Manhattan, panicked residents of Manhattan run through the bridge's walkway to flee from the city, only for the monster's tail to emerge from the waters of the East River and smash through the center of the bridge, destroying it and killing many civilians in the process.

Retrieved from "https://godzilla.fandom.com/wiki/Brooklyn_Bridge?oldid=294901"
Community content is available under CC-BY-SA unless otherwise noted.