Newly released or upcoming content
Gojipedia doesn't currently possess thorough information on this specimen, character, or event. This article will be updated with new information as it arises, and is subject to change.

"Camazotz", literally meaning "death bat", was a Mayan bat god associated with night, death, and sacrifice. This name was likely chosen due to Camazotz's strong resemblance to a bat and due to his god-like status as a Titan capable of challenging Kong. It is also possible that Camazotz himself is the Mayan bat god.

Camazotz is a massive gray-colored bat-like creature with demonic horns and facial features, as well as large tattered wings covered in long, sharp spikes. These wings can be folded and used as forelimbs while Camazotz is standing or walking. His entire body is covered in angular, plate-like armor. His left horn appears to be broken, possibly from a previous conflict. He also has what appears to be a mane of black-colored fur covering the entirety of his back and parts of his neck. His jaws are filled with dozens of jagged, dagger-like teeth. Camazotz's tail is long and prehensile, and is covered in spikes. His eyes are white and faded due to a millennia of living in darkness, and his blood is dark black and oil-like.

The roars of Camazotz are written as "skreeeee".

Camazotz originated within the Hollow Earth, inhabiting a particularly dark portion of the subterranean ecosystem. He was known to the Iwi on Skull Island, who left ancient hieroglyphs near the island's Hollow Earth entry (predating every other Iwi writing that Monarch had found), which seemingly prophesized Camazotz's future emergence that would lead to the island's own storm barrier permanently enshrouding it. An Ancient Guarani prophecy also seemingly referred to Camazotz as the Eternal Bat and the destroyer of the stars and mankind.

In 2019, Camazotz was among the Titans awoken by Ghidorah and ordered to attack humanity. Camazotz emerged from an unknown location and attacked the night-enshrouded San Diego with his minions. Monarch fighter pilot Audrey Burns and her squadron were sent to intercept the Titan and his horde, but were annihilated after Audrey suffered a panic attack, unable to give her squadron orders or help them fight off Camazotz. When the ORCA called the Titans to Boston, Camazotz apparently did not arrive in time for the battle and did not see Godzilla become the new ruling alpha. At some point afterwards, Camazotz retreated back into the Hollow Earth.

Camazotz resurfaces in 2021 at Skull Island. The first indication of his presence is the island experiences its first seismic activity in years, and a day after that, a perpetual superstorm that was left by Ghidorah in the Pacific Ocean begins moving out of its original fixed position and towards Skull Island. A week later, Camazotz finally emerges: Ghidorah's storm merges with the island's storm barrier (creating a Fujiwara effect that enshrouds the island in a perpetual storm), and at the same time, Monarch blast Skull Island's Vile Vortex open with charges; with the passage opened and with the island enshrouded in artificial darkness, Camazotz emerges with his horde, seeking to conquer the island. The hellish Titan is met by Kong, and the two proceed to battle. As Camazotz battles Kong, his horde engages the Monarch fighter pilots sent to stop them. While battling, Camazotz delivers several decisive blows on Kong, including lifting him in the air and dropping him several times. After subduing the ape, Camazotz prepares to feed on his blood, but is distracted by the Monarch fighter jets. Audrey, finally having made peace with her fear of the Titan, flies her jet directly past the creature's face, disorienting him and causing him to slam into the ground. Taking advantage, Kong puts Camazotz in a chokehold and proceeds to brutally pummel him. On the brink of death, Camazotz is dragged by the horns by Kong back over to the hole he emerged from. With a devastating punch, Kong breaks the bat-like Titan's jaw, knocking out several teeth before throwing him back down into the Hollow Earth.

Although Camazotz does not emerge again, the radical change he made to Skull Island's climate is permanent, leading to the eventual destruction of Skull Island's entire ecosystem[1] and the relocation of Kong to the Hollow Earth.

Being nearly blind, Camazotz has developed powerful echolocation to help him navigate his surroundings and locate other Titans.

Camazotz's wings allow him to fly, granting him incredible speed and maneuverability while in flight. He is able to destroy entire squadrons of fighter jets, and his aerial abilities gave him a combat advantage over Kong.

It's indicated that he caused Ghidorah's remnant superstorm to shift from its original position and collide with Skull Island's storm barrier so that the resulting Fujiwara effect would enshroud the island in complete darkness to allow him rise from the Hollow Earth. What's more, he did this from within the island's then-sealed Hollow Earth passage.

Camazotz's long spiked tail is prehensile, able to wrap around and even lift Titan opponents into the air.

Camazotz can emit a high-pitched supersonic screech powerful enough to disorient the senses of other Titans, like Kong. When he first emerges from Skull Island's Vile Vortex, his screech is seemingly heard across the island.

Apart from his sonic screech, Camazotz's other weapons are his teeth, claws, and wings. He is notably strong enough to lift Kong up before dropping him hundreds of feet from the air. Camazotz repeats this process several times, showing no signs of exhaustion. When grappling with Kong, Camazotz utilizes his claws and teeth to deadly affect.

Camazotz leads a legion of smaller (by comparison) bat-like creatures that act as his eyes and ears as well as extensions of his being. Whether this is a symbiotic relationship or not is unknown.

Having developed super-sensitive hearing to compensate for his blindness, Camazotz is sensitive to extremely loud noises close to his head such as the screech of a jet passing too close to him.

It's postulated by Houston Brooks that Camazotz, as a Titan that evolved to live in total darkness, has a distaste for sunlight; to the point that Camazotz refuses to emerge on Skull Island until after he's created artificial darkness. Living in perpetual darkness has also rendered Camazotz nearly completely blind. 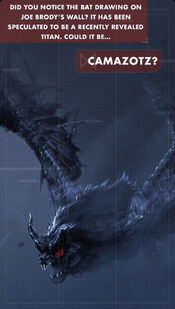 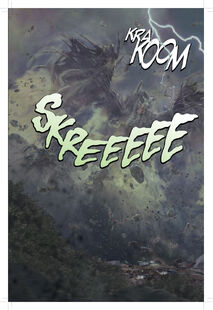 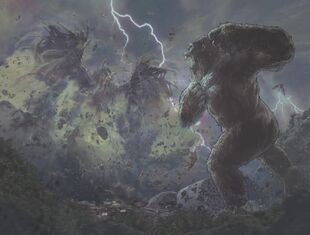 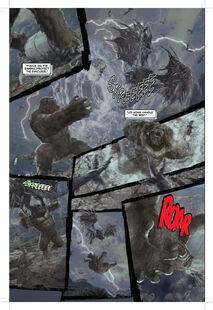 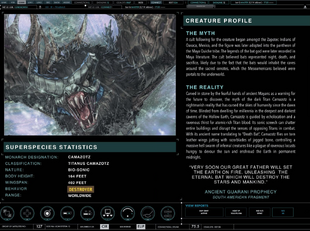