Godzilla
Crystal Godzilla was a kaiju created for the unmade 1994 film Godzilla vs. NeoGodzilla.

The first incarnation of Crystal Godzilla was designed with a Space Form, a Combat Form, and a Mature Form. The Space Form would be encased in a thick layer of crystals and could quickly travel through outer space. The Combat form would have Crystal wings on the shoulders, and crystals on the body that could expand or contract. The Mature Form would look very similar to the Combat form, but with added layers of crystals on its chest, legs, and head to increase defense.

No official concept art exists of the second version of Crystal Godzilla, so information on its appearance is quite limited.

In 1995, "Crystal Godzilla" would resurface - but in a radically different form. Acting as the third form of Ghost Godzilla in Godzilla vs. Godzilla (Story Plan A), this next iteration of Crystal Godzilla created by Kazuki Omori would literally be the 1954 Godzilla with a semi-transparent, crystalline figure, formed from the dust of one of its bones. A revived Little Godzilla would later do battle with this new version of Crystal Godzilla. Outside the name, it shares no similarities with it's 1994 precursor. 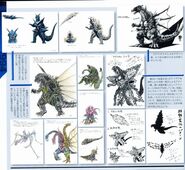 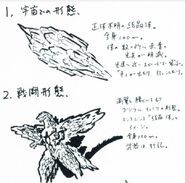