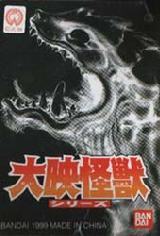 Three six-inch figures were made for the film Gamera 3: Revenge of Iris: Gamera 1999, Hyper Gyaos, and Iris. The Gamera figure was subsequently re-released as part of Bandai's Movie Monster line in 2001, and was re-released in the Daiei Kaiju line in 2006 along with the Hyper Gyaos.

Iris tag
Add an image to this gallery

In 2006, to tie in with the film Gamera: The Brave, Bandai continued the Daiei Kaiju line with a six-inch figure of Toto, as well as re-releases of the Gamera 1965, Gamera 1999 and Hyper Gyaos figures, each featuring new paint jobs. The tags have green borders on both sides, and the back shows a silhouette of Gamera in a fiery background.

Hyper Gyaos reissue
Add an image to this gallery

Retrieved from "https://godzilla.fandom.com/wiki/Daiei_Kaiju_(Bandai_Japan_Toy_Line)?oldid=325602"
Community content is available under CC-BY-SA unless otherwise noted.