Daimajin (大魔神,   Daimashin?) is a 1966 tokusatsu kaiju film produced by Daiei Film Co. Ltd. It is the first film in the Daimajin trilogy, and introduces the general formula for Daimajin's films which the rest of the trilogy follows. It was released to Japanese theaters on April 17, 1966 and to American theaters on August 9, 1968.

Large tremors send villagers scattering, as they fear that an ancient spirit, named Daimajin, is beginning to wake up. The entire village gathers at their shrine to pray Majin will remain imprisoned. This torchlit parade is observed by the local feudal boss, The fair and just Lord Hanabasa. It is also observed by his treacherous chamberlain, Samanosuke, who has been waiting for just such a diversion to stage a coup d'état.

Samanosuke murders Hanabasa, plunging the area into chaos. Ten years pass, and Samanosuke has implanted himself as brutal dictator over the area, using every man in the starving village as slave labor to build his fortress. The place is ripe for revolution, and surviving Hanabasa retainers are starting to filter in on the tenth anniversary of the coup.

Kogenta, a heroic samurai and long-time loyalist to the Hanabusas, journeys to the village to try to gather the old retainers, but gets himself captured. A boy gets word to Tadafumi and his sister, Kozasa (Miwa Takada) that their friend is a prisoner. Tadafumi, being a brave young samurai, tries to rescue him, only to discover it's all a trap laid by Samanosuke. With both the men under arrest and awaiting execution, Shinobu tries to talk some sense into the tyrant, who is drinking way too much and becomes incensed at all this talk of the god of the mountain; he murders the priestess and orders the idol demolished, to all the more thoroughly demoralize the villagers.

As the crew travel up the mountain, they capture Kozasa and order her to take them to the statue, but she has to be forced under their control until she relents. The crew try breaking the statue with chisels and hammers, but fail. Eventually, they drive a nail into the statue's forehead, making it bleed. The team tries to flee, but the ground opens up in front of them, causing them to fall into the chasm created. Kozasa is still alive, and unharmed, and Daimajin is now awake once more. Meanwhile, at the fortress, Tadafumi and Kogenta are tied to large crosses, awaiting their fates. Kozasa, sensing no reaction from the idol, offers her life to Daimajin and attempts to throw herself over the nearby waterfall, stopped only by the Boy. This is apparently good enough, as the rock and earth covering the lower half of the idol fall away, and the fifty-foot statue walks out into the clearing. Kozasa prostrates herself before it, and the idol gestures before its face: the stone mask disappears, revealing the true face of the Daimajin, a vengeful spirit resembling that of a grotesque shogun. he travels down the mountain, and towards Samanosuke's fortress.

Destroying the fortress, Daimajin kills Samanosuke and his forces, but then extends his wrath to the villagers themselves. Kozasa prays to Majin once more, and lets her tears land on his foot. He then realises that his mission is accomplished, and separates himself from the stone statue. Flying away in the form of a ball of fire, the statue collapses into dust. 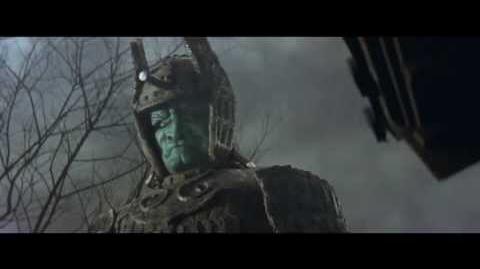 Retrieved from "https://godzilla.fandom.com/wiki/Daimajin_(1966_film)?oldid=286060"
Community content is available under CC-BY-SA unless otherwise noted.