Desghidorah (デスギドラ,   Desugidora?) is a Ghidorah created by Toho that first appeared in the 1996 Toho film, Rebirth of Mothra.

Desghidorah's roars were adapted from stock elephant trumpeting performed by Frank Welker. The roars were later reused for the Ultraman Tiga monster Gatanozoa. 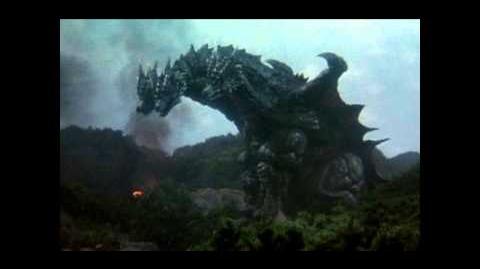 Desghidorah is an alien creature and relative of King Ghidorah that gains power from destroying and feeding off of the life energies of the planets in ravages. It arrived in the Solar System approximately 65 million years ago, and cleansed Mars of life before moving onto Earth, which at the time was inhabited by the Elias and their guardian, Mothra. The resultant battle obliterated the Elias' civilization, but Desghidorah was defeated and locked away in a mystically sealed chamber so no one could ever release him.

Millions of years ago, Desghidorah first appeared on the planet Mars, destroying it and turning it into a wasteland. It then flew to planet Earth with more intent to destroy it. It began attacking the planet, but it was met with a revolt. A race called the Elias, small human-like beings, sent Mothra to defeat him. The battle was fought for a very long time, and the Elias' civilization was nearly destroyed. Desghidorah was defeated and locked away in a chamber so no one could ever release him.

In the year 1996, a company is clearing out a forest when a worker stumbled across a buried structure with ancient writing on it. The worker took a small pendant from the stone, and gave it to his daughter as a gift. Not long after, the Girl was visited by Belvera, one of the last surviving members of the Elias. The other survivors, Moll and Laura, came to try and take the pendant, which was called "The seal of Elias." The seal would awaken and release Desghidorah, and Belvera would try to control it.

Belvera went to the Desghidorah's tomb, and caused it to rise from the ground. She managed to break it open, and Desghidorah was released. Desghidorah rose from the tomb and began to absorb energy from the forest around him.

Moll and Laura sent Mothra to defeat him, but she was quickly overpowered. Her egg hatched prematurely, into Mothra Leo, and he came to save his mother. Even the combined efforts of Mothra and Leo, they couldn't defeat it. Mothra flew off with her child and died over the ocean.

Leo wanted revenge, and he formed a cocoon and turned into his Imago form. Desghidorah harvested all the energy he could, then regrew his wings. Mothra Leo flew after the monster, and fought him with all his might. After a long battle, Leo sealed Desghidorah back in its tomb, then returned to his island.