Dogora (ドゴラ?) is a gaseous jellyfish-like alien kaiju created by Toho that first appeared in the 1964 film, Dogora.

Dogora first appeared in space, feeding on radiation. It destroyed a television satellite, causing it to mutate. It came to Earth and began eating diamonds and other jewels. A professor created a synthetic diamond, and Dogora was attracted to it. It melted the safe doors and ate the diamonds. It attacked a coal plant, and it was discovered that it feeds on carbon. Defense forces detected Dogora, but it was a swarm of bees. The bees flew into a cloud, and dozens of multiple-colored rocks fell out. Dogora was detected again as he attacked Fukuoka. He began to feed on coal and diamonds, but was confronted by the J.S.D.F., where he was blown to bits by missiles, but not before hurling a bridge at the humans in an attempt to ward them off. The pieces of Dogora regrew into their own cells, and attacked again. It was discovered that Dogora was weak to wasp and bee venom, as it's cells turn hard from it. Helicopters released venom on top of the Dogoras, causing them to harden and die.

This kid-friendly Japanese TV show was known for its use of plush toys and action figures of famous kaiju to in the portraying of the exploits of Toho's famous kaiju universe. Dogora makes an appearance on one episode being an evil spawn of the Xiliens.

Bee and wasp venom is lethal to the Dogora and will cause their bodies to solidify.

Dogora appears in three different ways in this popular Godzilla game for the NES. It appears in its own hyperspace type, and can first be encountered on Earth. Dogora first appears in its classic, large form in the stage's background, and doesn't attack.

Dogora's other two versions appear as smaller enemies in the stage. One version is dark purple while the other is a bright orange/yellow. The differences between the two colours dwell upon the damage they deal and the items they drop. Purple Dogora deal no damage and drop health power ups when they are destroyed. Orange Dogora deal a small amount of damage and drop energy power ups when destroyed. This is also the only time in the game that the energy power ups can be found.

Dogora in Godzilla: Monster of Monsters

The larger Dogora, seen in the background of its stage, plus two Dogora Cells in Godzilla: Monster of Monsters
Add a photo to this gallery 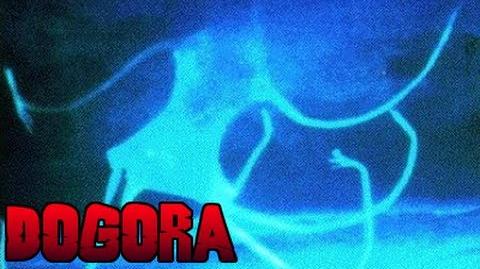 Retrieved from "https://godzilla.fandom.com/wiki/Dogora?oldid=398135"
Community content is available under CC-BY-SA unless otherwise noted.