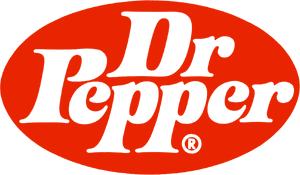 Dr Pepper is a soft drink marketed as having a unique flavor. Created in the 1880's by Charles Alderton of Waco, Texas, and first served around 1885, Dr Pepper was first nationally marketed in the United States in 1904 and is now also sold in Europe, Asia and South America. Variants include a no-sugar version, Diet Dr Pepper, as well as a line of versions with additional flavors, first introduced in the 2000s.

W.W. Clements, a former CEO and president of the Dr Pepper/7-Up Company, described the taste of Dr Pepper as one-of-a-kind, saying "I've always maintained you cannot tell anyone what Dr Pepper tastes like because it's so different. It's not an apple, it's not an orange, it's not a strawberry, it's not a root beer, it's not even a cola. It's a different kind of drink with a unique taste all its own."

Product placement for Dr Pepper was featured in the Americanized version of The Return of Godzilla, Godzilla 1985, and two commercials for Dr Pepper in the 1980's featured Godzilla in them.

Shot in black and white, this commercial shows a cast of Japanese and American citizens watch Godzilla destroying a city. He begins attempting to drink various soft drinks from a tanker truck and some train cars at a freight yard, but doesn't like the flavor, causing him to destroy the tanks. He then finds a giant can of Dr Pepper on the roof of a nearby building. After drinking it, he is finally appeased.

The PepperGoji (ペッパーゴジ,   PeppāGoji?) is the Godzilla suit design used in the 1985 Godzilla Dr. Pepper® commercials.

The PepperGoji bears a strong resemblance to the Godzilla suits from the 1960's, especially the KingGoji and DaisensoGoji. It features a bulky body with muscular arms and four large fingers. The suit only has a single row of very large and thin dorsal plates on its back. The suit's head is relatively large compared to its body, and features large triangular teeth. This suit's eyes are much more reptilian-looking than previous designs, featuring slit-like pupils, and glow brightly.

Newzilla, a kaiju created for the Dr. Pepper Godzilla commercials

A Dr Pepper machine in Godzilla 1985

Godzilla 1985 Dr. Pepper Commercial 2
Add an image to this gallery

Retrieved from "https://godzilla.fandom.com/wiki/Dr_Pepper?oldid=366097"
Community content is available under CC-BY-SA unless otherwise noted.