Frankenstein (フランケンシュタイン,   Furankenshutain?) is a kaiju created by Toho in the 1965 Toho film, Frankenstein Conquers the World, based on Frankenstein's monster from Mary Shelley's classic horror novel, Frankenstein.

Frankenstein's Japanese name is a rōmaji of his English name, the monster's creator's surname, Doctor Victor Frankenstein, in Mary Shelley's original novel. Frankenstein's name follows a trope that has existed since versions of the character debuted in film.

Frankenstein's appearance is primarily inspired by actor Boris Karloff's iconic portrayal of the creature in the novel's 1931 film adaptation. Toho's Frankenstein features the tall, skinny physique of Karloff's version, along with the trademark tall forehead and flat-topped angular head. Unlike most other interpretations, Toho's Frankenstein seems to have normal human-looking skin with no physical decay signs on his body and some body hair. Due to his size, Toho's Frankenstein also wears a large makeshift cloak presumably made of fur rather than normal clothing.

Frankenstein is portrayed as an innocent, childlike, but still relatively intelligent creature, similar to the version that appeared in Universal Pictures' films featuring the character. Toho's Frankenstein is mute and unable to speak but does seem able to understand human speech. He is also somewhat feral but isn't hostile or dangerous towards humans as long as they don't try to harm him. Frankenstein shows compassion and loyalty towards Dr. Sueko Togami, the scientist that raised him. Even after escaping from the laboratory, Frankenstein visits Sueko's apartment. Frankenstein also takes it upon himself to fight Baragon when the creature threatens Sueko. 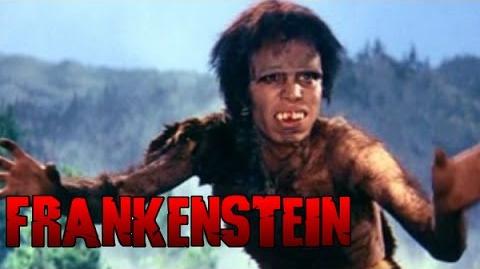 Frankenstein was both created by and named after a German scientist named Victor Frankenstein in 1800s. The man, seeking to create life, forged an artificial human from the pieces of several corpses and reanimated it using electricity. Though the creature appeared to die at several points over the next several decades, it always managed to return due to its immortal heart. The heart eventually found itself in the possession Dr. Liesendorf, a scientist in Frankfurt, Germany.

In 1945, Liesendorf, who was studying the heart, lost it to Adolf Hitler's Nazis during the final days of World War II. The Nazis, hoping to use the heart's secrets to create immortal soldiers, shipped the heart to Japan to prevent it from falling into the Allied forces' hands. The heart was taken to a Hiroshima laboratory for study but was lost and seemingly destroyed when the United States dropped the atomic bomb on the city. The heart ended up surviving the nuclear blast unscathed, and continued to regenerate. Within a a decade, the heart had regenerated into the form of a young boy.

Ten years after the Hiroshima bombing, a wild boy was discovered wandering the city streets. Drs. James Bowen and Sueko Togami captured and studied him, discovering that he was regenerated from Frankenstein's lost heart. The scientists fed Frankenstein well, and in response to the protein-rich food, he began to grow incredibly fast. Frankenstein reached a height of 20 meters with extraordinary speed, forcing the scientists to incarcerate him in a cell. However, Frankenstein managed to escape his prison, his hand snapping off when his chains became too tight. Frankenstein returns to Sueko's apartment to see the doctor one last time before fleeing the city.

Frankenstein fled to the Japanese countryside, sending Japan into a panic with the public blaming him for the disappearance of livestock and people. It was later discovered that the people were eaten not by Frankenstein, but by a new, burrowing kaiju named Baragon, who has eluded detection for quite some time. However, when Baragon threatened Sueko, Frankenstein attacked him to save her. A vicious battle ensued, ending with Frankenstein killing Baragon by breaking his neck. However, Frankenstein didn't have long to savor the victory, for the ground underneath him, already weakened by Baragon's burrowing, gave way and sent Frankenstein into the bowels of the Earth. Sueko asked if Frankenstein died, but her colleague Dr. Yuzo Kawaji stated that Frankenstein could never die, so he'd probably return someday. Dr. Bowen suggested that maybe it was best if Frankenstein did die, as a monster like him could never exist peacefully in this world.

People later discovered that some of the immortal cells Frankenstein left behind in Japan regenerated and took on their own lives. One of these Frankenstein spawns, Sanda, was raised from childhood by a team of kind scientists before he escaped to the mountains and grew into a benevolent giant like his predecessor. The other, Gaira, grew up underwater surrounded by dangerous creatures and became a violent and hateful man-eating beast.

Frankenstein can never die due to his immortal heart. The film implies that Frankenstein's heart not only survived being at ground zero when the U.S. dropped the atomic bomb on Hiroshima but gradually regenerated into a human being over the next two decades. While still young, Frankenstein survived being hit by a car head-on without suffering any visible harm. Frankenstein is also impervious to bullets. Frankenstein could withstand repeated strikes from Baragon's heat beam and eventually triumphed over his larger and more dangerous adversary.

Frankenstein's enhanced regeneration allows for virtually limitless healing that makes him practically immortal. Not only did his heart regenerate an entire body, but he was later shown to instantaneously grow back his hand after it was severed during his escape. Dr. Liesendorf stated that Frankenstein's severed tissue is capable of taking on a life of its own, demonstrated when the severed hand began to move and search for food on its own. Later, when the monsters Sanda and Gaira regenerated from samples of Frankenstein's flesh left behind.

Frankenstein is also considerably intelligent. Despite not understanding human speech patterns when captured, Frankenstein gradually understood when his caretaker, Sueko Togami, spoke to him. Despite his size, Frankenstein can stealthily feed on livestock during the night without arousing human suspicion. Frankenstein is also shown creating traps while hunting, utilizing his size to dig large holes and covering them with branches to trap prey. One of these traps was capable of stopping a tank. Frankenstein created makeshift clothes presumably from animal fur and built a large bonfire in a cave. Frankenstein later used this fire to light torches and utilized them in his battle with Baragon.