Start a Wiki
← None | Frankenstein vs. Baragon | War of the Gargantuas →

Frankenstein vs. Baragon (フランケンシュタイン対地底怪獣,   Furankenshutain Tai Chitei Kaijū?, lit. Frankenstein Against the Subterranean Monster) is a 1965 tokusatsu kaiju film co-produced by Toho Company Ltd. and UPA. This film features a Japanese version of the Frankenstein Monster, who becomes giant-sized to fight the giant subterranean monster, Baragon. It was released to Japanese theaters on August 8, 1965 and to American theaters on July 8, 1966.

The prologue is set in World War II, circa 1945. Nazis break into the laboratory of Dr. Reisendorf and confiscate the heart of the Frankenstein Monster, on which he is busy experimenting. The Nazis travel by submarine to the Pacific. The Allied Forces then bomb their submarine, but not before the Nazis are able to pass the heart (contained in a locked chest) to the Imperial Japanese Navy, who take it back to Hiroshima to be experimented on. But just as they are about to begin, Hiroshima is bombed by the Allied Forces, and the heart is lost.

Fifteen years later, in 1960, a savage boy runs rampant in the streets of Hiroshima, catching and devouring small animals such as dogs and rabbits. This comes to the attention of American scientist Dr. James Bowen and his assistants Sueko Togami and Ken'ichiro Kawaji. A year later (1961), they investigate and find the boy hiding in a cave on a beach, where a mob of outraged villagers has almost caught him. While the strange boy catches media attention and is taken care of by the scientists, another astounding event evades the public's eye. Once the boy is taken to the hospital, it is discovered that he is Caucasian and his body is building a strong resistance to radiation rather than getting sick from it.

The Former Naval Captain Kawai, who brought the Frankenstein heart to Japan in WWII, is working in an oil factory in Akita Prefecture, when a sudden earthquake shakes the factory and collapses a tower, beneath which he saw the ghastly face of a giant dinosaur with a glowing horn.

Meanwhile, Dr. Bowen and the scientists find that the strange boy is growing due to intake of protein. Afraid of his strength, the scientists lock and chain the boy in a jail cell, and Sueko, who really cares for him, feeds him some protein food to sustain him. Meanwhile, Dr. Bowen is visited by Kawai, who tells him that the boy could have grown from the heart of the Frankenstein Monster, as the boy was seen in Hiroshima more than once before. At Bowen's advice, Dr. Kawaji confers with the aging Dr. Reisendorf in Frankfurt. Reisendorf tells Kawaji of the story of the Frankenstein Monster and its noted virtual immortality, due to the intake of protein. Reisendorf recommends cutting off the monster's arm or leg, speculating that a new one will grow back. When relating this to his fellow scientists upon his return to Japan, Sueko strongly objects to this method, fearing that nothing may grow back. Even when Bowen suggests that they wait a little longer to think it over, Kawaji tenaciously attempts to sever one of the now-gigantic monster's limbs. He is interrupted by a TV crew, whom Kawaji allows to film the monster, though they enrage it by shining bright studio lights at its face. The monster, heretofore known as "Frankenstein", breaks loose and is on the run from the Japanese police. He even has a tender encounter with Sueko on the balcony of her apartment before he has to run away.

While Frankenstein is on the run, he travels to many places, from Okayama (where he eats more animals) to Mount Ibuki, where his primitive childlike activities (throwing trees at birds and trying to trap a wild boar) end in disaster.

But unbeknownst to Bowen and the scientists, Baragon, the monster Kawai saw earlier, goes on a rampage. Tunneling under the earth, he pops out and ravages villages, eating people and animals and leaving destruction in his wake. People believe this is Frankenstein's doing, and the misunderstood monster is wrongly hunted down by the military, though not before narrowly escaping. Before Bowen and his assistants have no choice but to dismiss Frankenstein, Kawai returns to tell them that Frankenstein may not be responsible for the disasters; it could be the monster he saw in Akita, Baragon. He tries to convince the authorities, but to no avail. Kawaji still wishes the scientists luck in finding Frankenstein.

Bowen, Sueko, and Kawaji then form a search party and venture into the forest in which they believe Frankenstein is currently hiding. But Kawaji, to the shock of Bowen and Sueko, then proceeds to attempt to kill him, believing that Frankenstein could be dangerous by his very nature, and not even Sueko could possibly tame him. He intends to blind him with chemical grenades and capture him to recover his heart and brain. Kawaji presses on to find Frankenstein, and instead finds Baragon. Kawaji and Bowen try in vain to stop the monster with the grenades, but it is about to eat Sueko, until Frankenstein comes to the rescue. The cataclysmic battle between the two giant monsters then begins. After the fight, the area where the fight took place starts to trumble, and then both monsters are sucked into the earth.

Actor's name on the left, characters played on the right.

This idea for this film originated with Willis O'Brien, who pitched a film pitting King Kong against a giant version of Frankenstein's Monster. The idea was never adopted by Universal Pictures or RKO Pictures, so it was stolen by independent producer John Beck and pitched to Toho Company Ltd. under the title King Kong vs. Prometheus. Toho agreed to produce a film using Beck's project, but decided to replace the Frankenstein/Prometheus creature with their own monster, Godzilla. The project ultimately became King Kong vs. Godzilla after Toho arranged a deal with RKO to use the character of Kong.

Producer Tomoyuki Tanaka had originally commissioned a film called Frankenstein vs. the Human Vapor (フランケンシュタイン対ガス人間,   Furankenshutain tai Gasu Ningen?), with a draft written by Kimura. This also follows up with the film The Human Vapor, as Mizuno finds the Frankenstein Monster's body, and revives him, so that he can help him use the Frankenstein formula to revive his beloved girlfriend Fujichiyo (who died at the end of said film). This was also supposed to be Toho's co-feature with the Japanese release of the film My Fair Lady.

There are many references to the 1931 Frankenstein film adaptation, an iconic representation of the monster featured in the famous book by Mary Shelley. In general, the monster is referred to by the name of his creator ("Frankenstein"), as opposed to "The Frankenstein Monster" (which Dr. Bowen did refer to him as once in this film).

There was also an alternate ending for the movie, in which, after defeating Baragon, instead of falling in to a fissure in the ground, Frankenstein is attacked by a Giant Octopus. During the fight Frankenstein is dragged in to the sea and presumably drowned and eaten by the Giant Octopus. According to Ishiro Honda, the American backers for the film were astonished by the Giant Octopus scenes from King Kong vs. Godzilla and wanted the Giant Octopus to be included in the American version of the film. The sequence was shot specifically for the U.S. version, but Henry Saperstein, the lead U.S. producer of the film, felt it was too abrupt and rejected it. This alternate ending is often included in Toho's DVD releases of the film, and was previously accidentally aired on Japanese television, confusing many viewers who had seen the film in theaters. The Giant Octopus would go on to appear in this film's loose sequel, War of the Gargantuas.

Frankenstein vs. Baragon was released theatrically in the United States by American International Pictures under the title Frankenstein Conquers the World. AIP cut approximately three minutes of footage from the film and dubbed the dialogue to English. While Nick Adams' dialogue had been dubbed over for the Japanese version, it was preserved in the American cut. 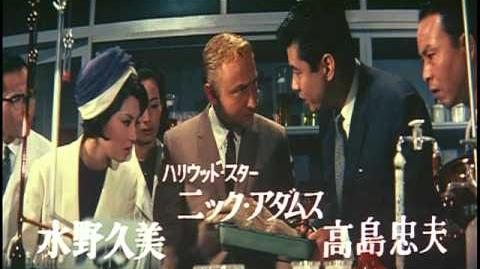 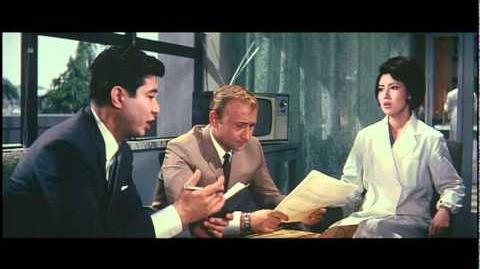 Main article: War of the Gargantuas.

Toho produced a loose sequel to this film, War of the Gargantuas, the following year in 1966. This film revolves around two monsters, Sanda and Gaira, who have regenerated from Frankenstein's cells. Sanda, like Frankenstein, was raised by human scientists and became kind and gentle, while Gaira grew up to become a violent and savage man-eater.

Retrieved from "https://godzilla.fandom.com/wiki/Frankenstein_vs._Baragon?oldid=343584"
Community content is available under CC-BY-SA unless otherwise noted.