Gaira (ガイラ,   Gaira?) is a Frankenstein-spawn kaiju created by Toho that first appeared in the 1966 Toho film, War of the Gargantuas.

Gaira resembles his "brother," Sanda, being a humanoid giant whose body is covered in fur. However, Gaira's skin and fur are a greenish color, and his fur somewhat resembles seaweed, loosely hanging on his body. The top of Gaira's head is flat, his nose is very large and wide, and he has a noticeable underbite, with two fangs on his lower jaw extending outside of his mouth.

In Go! Godman, Gaira has a new head, with no fangs on his lower jaw and a mane of brown hair around his head. In the follow-up series, Go! Greenman, Gaira's suit is worn and beginning to decay, and appears as a much darker color, with much of the suit's fur having fallen off.

In the 2008 Go! Godman film, a new Gaira suit was constructed to replicate his appearance in War of the Gargantuas. This new suit, designed by Fuyuki Shinada, is nearly identical to Gaira's original appearance, only being a lighter shade of green.

In War of the Gargantuas, Gaira is a brutal and violent monster that kills virtually anything he comes into contact with. Gaira is fond of sinking ships and killing their crew and coming ashore to kill the helpless humans. The scientists who research Gaira suggest that Gaira became this way due to spending his life in a dark and dangerous underwater environment surrounded by hostile sea creatures, unlike Sanda, who was lovingly raised by humans.

In Godzilla: Rulers of Earth, Gaira is incredibly violent and despises humanity due to being experimented on by the Chinese military for several years. As a result, he attacks anything he sees after breaking free and even attacks his brother Sanda when the latter tries to stop him. Eventually, after living with his brother on the Monster Islands, Gaira becomes less aggressive and ultimately fights alongside the other Earth monsters to drive off the Trilopods in Los Angeles.

In War of the Gargantuas, it is proposed that Gaira was created when part of Frankenstein's flesh broke off and was left underwater. Over time, the flesh regenerated into Gaira and became very bitter and violent due to existing in a dark and dangerous underwater environment.

Gaira was created from the flesh of Frankenstein, along with Sanda. He was first seen at sea, attacking ships and eating humans. He attacked the shoreline at night, but he disliked the sun and he always returned to the ocean during the day. He was led into a trap, and he was nearly defeated by the J.S.D.F.. Sanda arrived to save him, and he took him to the mountains. Gaira started to eat humans, much to his brother's anger, and Sanda forced him to Tokyo. The two fought and were led out to sea. They were both engulfed in a volcano and died.

He of the Sun

Gaira made a brief cameo appearance within Toho's television drama, He of the Sun where he combated the extraterrestrial insectoid kaiju Kiyla, from the Ultraman franchise. In this series, Gaira used the same suit from his first appearance in War of the Gargantuas.

Gaira also appeared in the Kyodai Hero series, Go! Godman where he was a rampaging beast. Once he was spotted by a group of small children, they called out in distress to their hero Godman. Zooming across the sky and descending directly in front of Gaira, Godman began to engage the monster in combat. After an exhausting duel, Godman eventually overpowered Gaira and destroyed him. Gaira was the nineteenth monster to battle Godman in the series.

Gaira too made an appearance in Go! Godman's follow-up show Go! Greenman, this time being created by Tonchiki to acquire the blood of children for his master Maoh. Similarly to his appearance in Godman, Gaira tormented a group of children before they summoned the eponymous hero, this time being Greenman. Soon, after Gaira was near defeat, the battle was halted when the monster altered his own size. Now taking on a much more giant stature, Greenman's defeat became imminent. However, Greenman was also able to grow and resumed their combat. After much more tiring attacks, Greenman summoned the Greenman Stick and destroyed Gaira with the weapon's explosive tip. Gaira was the fourth monster to battle Greenman in this show. The design is more dark-colored and spiky than the original. The suit also appears to be heavily rotting, with a visible tear in the legs. In the show, Gaira has a modified Godzilla roar, with some of his original vocalizations mixed in.

Gaira is mentioned in the 2002 Godzilla film, Godzilla Against MechaGodzilla. When discussing the frequent attacks by kaiju on Japan following 1954, Prime Minister Machiko Tsuge mentioned Gaira's attack in 1966, and how Maser Cannons were implemented to battle kaiju for the first time, successfully defeating Gaira.

To celebrate the anniversary of both Go! Greenman and Go! Godman, Toho brought back Gaira in 2008 to fight Godman and Greenman in the crossover film. This time, he was spawned from the flesh of Tsunojiras. He was first seen attacking Mika Ayase and Koichi Matsushita and later battled Godman. Jilarji also later appeared and teamed up with Gaira to defeat Godman for good. The two managed to knock off one of Godman's bracelets and nearly strangled him to death, but Godman got the bracelet back and was joined by Greenman to defeat them. The suit looks exactly like the original, except slightly bulkier. Gaira's normal roars were also reused for the first time since his appearance in War of the Gargantuas.

Gaira has regenerative capabilities, due to being spawned by Frankenstein's immortal cells.

Gaira is shown to have a good deal of intelligence, but it is reduced by his violent and brutish nature.

In War of the Gargantuas, Gaira has a strong aversion to sunlight and will retreat whenever the sun rises.

He was also highly susceptible to the J.S.D.F.'s Maser Cannons, and would have been killed if Sanda had not saved him.

Gaira made his comic debut in Godzilla: Rulers of Earth #5. Gaira appeared for the first time and rampaged years ago, but he was captured. He later was freed by Lucy Casprell so that he could fight Varan. At first, Gaira overpowers Varan. However, when Varan retreats to the ocean, Gaira grabs his tail and does not let go until he disappears into the sea along with Varan. Before disappearing, he saw his 'brother', Sanda, reaching out to him. Sanda then follows his 'brothers' trail as he and Varan crashed into the ocean. The two interrupted Godzilla's search for Manda, Gezora and Titanosaurus as well as scared away Godzilla's meal. Godzilla chased the twins through the ocean. Gaira, in a surprising turn, protected his brother from Godzilla's nuclear breath, running into the city for cover. It wasn't until Gaira's attempt to save Sanda from tank fire did the two resumed their constant battle. The battle was interrupted when the King of Monsters blasted the ground between them and forcing the two to work together again. Later the two are seen on the new Monster Islands. Gaira was later seen coming to the rescue of his brother when the Trilopods attacked the Monster Islands but was later captured along with Sanda and taken to the Trilopod hive with the other Earth monsters. Gaira was freed by King Caesar and joined the other monsters to assist the severely outnumbered Godzilla. Gaira and Anguirus managed to kill the Gezora-Trilopod. He later attempted to attack the massive Magita but was tossed to the side easily. After Godzilla killed Magita, Gaira, his brother, and the other monsters followed Godzilla out to sea.

Gaira in a flashback

Sanda reaches out for Gaira 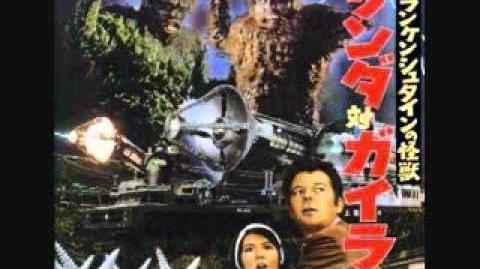 Gaira Roars
Gaira's roars from War of the Gargantuas