Gamera: Guardian of the Universe

Gamera: Super Monster (宇宙怪獣ガメラ,   Uchū Kaijū Gamera?, lit. Space Monster Gamera), also known as Super Monster, is a 1980 tokusatsu kaiju film produced by Daiei Motion Picture Company. It is the eighth and final entry in the Showa Gamera series, and the last Gamera film written by Nisan Takahashi and directed by Noriaki Yuasa. Finally, this will be the last Gamera film up until Gamera: Guardian of the Universe that was released in 1995.

When the evil alien Zanon comes to enslave the Earth in his mothership, all hope seems lost. The Earth's resident superheroes, the Spacewomen, are powerless to stop him. They must enlist the help of a young boy who has a special connection with Gamera. The friend of all children then fights and kills the revived Gyaos, Zigra, Viras, Jiger, Guiron, and Barugon. He then sacrifices himself to kill Zanon by destroying his spaceship. 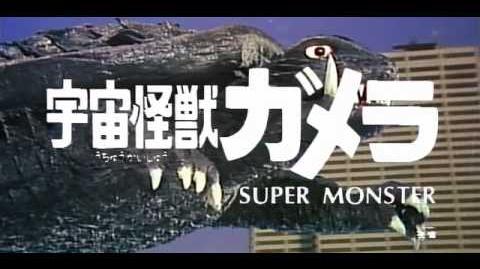 Retrieved from "https://godzilla.fandom.com/wiki/Gamera:_Super_Monster?oldid=392477"
Community content is available under CC-BY-SA unless otherwise noted.