Start a Wiki
← None | Gamera: The Giant Monster | Gamera vs. Barugon →

The film is similar in nature to the popular Godzilla films, and is also the first in a series of films about Gamera. It was one of the five Gamera films to be featured as episodes of the Mystery Science Theater 3000. 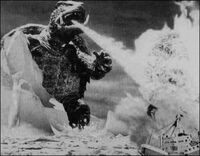 The film opens with Gamera's awakening from the unintentional detonation of an atomic bomb during a dogfight between American and Russian fighters. Like other "giant monster" movies, Gamera wastes no time in causing a rampage of destruction, first destroying a research ship, then making his way to Japan to wreak havoc. In an attempt to stop the monster, Gamera is sedated and vast amounts of dynamite are placed under him. The explosion knocks the monster on his back and it seems as though the problem has been solved. This is not the case, however, as Gamera reveals his ability to fly. A second plan is devised to stop the monster, this time by baiting him into a rocket that is to be launched to Mars. The plan is successful and Earth is safe from Gamera.

While Gamera does share many similarities with other "giant monster" films, especially the Godzilla series, it does contain one notable difference. At one point in the film, Gamera saves a small boy named Toshio Sakurai (renamed "Kenny" in the English version from Sandy Frank Productions) from death after knocking down a lighthouse. This leads the young boy to conclude that Gamera is not really destructive, but merely misunderstood and out of place in the world. This is a concept that would be seen in many monster movies to come.

Gamera: The Giant Monster was the only film in the original Gamera series to be released to American theaters. It was originally presented in America by World Entertainment Corp. and Harris Associates, Inc. who released it under the title Gammera, the Invincible, with two "m"s. All subsequent entries in the series spelled the main character's name "Gamera," and were released directly to television by American International Productions Television (A.I.P.-TV). Gammera, the Invincible's American premiere was in New Orleans on December 15, 1966.

Gammera, The Invincible was heavily re-edited from its original Japanese version. Shots and scenes were moved around, while some were deleted completely. New footage featuring American actors was spliced in to create a more international feel and to replace scenes shot in Japan featuring American characters, in a style similar to the U.S. release of Godzilla, King of the Monsters!.

Gammera, the Invincible was dubbed by Titan Sound Inc. It features the voices of Jack Curtis and Peter Fernandez, who are best known as voices in the English dubs of Speed Racer and Ultraman. Titan Sound Inc. was also responsible for dubbing the original U.S. Versions of Ebirah, Horror of the Deep and Son of Godzilla.

The Differences between the JP and US version are...

During the 1980s, Sandy Frank re-dubbed and distributed the Gamera series on VHS for home video (This was the version used for the Mystery Science episode).

The Sandy Frank version, titled simply Gamera is the Japanese version of the film dubbed into English. It does not contain any of the edits or added footage from the Gammera, The Invincible version. The only change is the opening credits, which replace the originals, with new ones electronically laid in over a stock shot of the ocean. Four of the other Sandy Frank Gamera releases have the same footage.

In 2010, Shout! Factory released the movie on DVD as Gamera: The Giant Monster, which was the original unaltered Japanese movie in an HD transfer with new English subtitles, and in full anamorphic widescreen. The DVD came packaged with a 12 page booklet featuring an essay by director Noriaki Yuasa. The DVD also had a publicity gallery, audio commentary, and a retrospective of the Gamera series. Shout Factory has since gone on to re-release the other Showa era movies with the original Japanese versions, and both English dubs included. 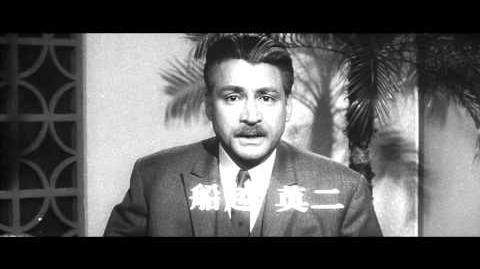 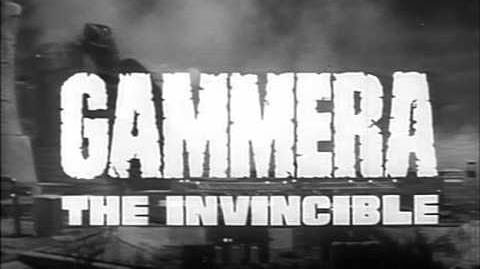 Retrieved from "https://godzilla.fandom.com/wiki/Gamera:_The_Giant_Monster?oldid=313437"
Community content is available under CC-BY-SA unless otherwise noted.