Hurdling through space, a meteorite collides with the rocket (as we learned in the last film) transporting Gamera off the Earth. Gamera, now freed, returns to Japan, destroys Kuroba Dam and takes off. Meanwhile, a mysterious group of travelers visit an island in the South Pacific. They plan to steal huge jewel from a cave protected by a local village. Eventually, they journey to the cave and find the opal. Traveling back to civilization, the only thief to survive the "heist" leaves the jewel beneath an infra-red light while playing poker. The light ends up incubating and hatch a giant monster from the opal, Barugon. Barugon emerges from the ship as it comes into Kobe harbor, destroying it. Barugon then attacks Osaka, freezing large parts of the city with a freezing tongue ray, and destroying a missile strike with a rainbow ray. Gamera, attracted by the rainbow ray, arrives on the scene. Barugon and Gamera fight. Gamera does well, until Barugon uses the freeze ray. Gamera then gets frozen solid and falls inert onto the ground. Victorious, Barugon departs Osaka for the next large urban target. Keisuke and Karen find Onodera, and wrest a confession about Kano's death from him. In the ensuing fight, Keisuke beats up on Onodera and ties him up. Keisuke and Karen then go to the Japanese defense ministry. There Karen outlines the "Diamond Lure" defense. This plans uses the giant diamond of the Black Tribe to lure Barugon into a lake to drown. The plan is effected but fails to move Barugon out into the lake. Afterwards it is theorized that the infra-red radiation has made Barugon immune to the effects of the "Diamond Lure". Another plan, the "Infra-red Diamond Lure" defense is hatched. This would involve putting the Black Tribe diamond in an infra-red generator and using the resultant ray to lure Barugon to a watery death. Karen reveals that rain weakens Barugon and the Japanese military keeps Barugon doused with artificial rain. The "Infra-red Diamond Lure" defense is put into effect. Onodera, however, gets wind of the plan and resolves to steal the Black Tribe diamond. The plan is executed and this time Barugon follows the lure without hesitation. Just as Barugon is about to be drawn into heavy water, Onodera bursts on the scene and steals the Black Tribe diamond. Barugon approaches the boat carrying the infra-red generator and destroys it. Barugon then eats Onodera - and the Black Tribe diamond. Having failed, the Japanese military keeps Barugon sedated with rain. In dejection, Keizuke and Karen visit the site of Barugon's attack on the missile battery and discover an anomaly, everything but glass has been destroyed. From this comes the theory that Barugon's infra-red beam can be reflected. With this information, the "Reflect attack" plan is hatched. A giant mirror is constructed and put in front of Barugon. Barugon is then goaded into firing the rainbow ray. The mirror reflects the ray back upon Barugon, but the monster stops firing before the ray can be lethal. This exchange again attracts Gamera, who has thawed out after last battling Barugon. This time, Gamera overcomes Barugon, and eventually manages to drag Barugon into deep water, where the monster drowns. The threat vanquished, Gamera flies away without causing any further destruction. 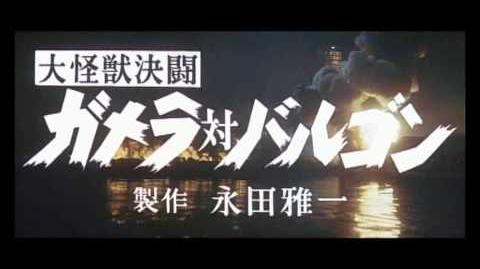