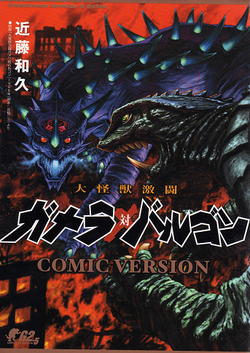 Gamera vs. Barugon (大怪獣激闘ガメラ対バルゴン－ＣＯＭＩＣ ＶＥＲＳＩＯＮ－,   Daikaijū Gekitō Gamera tai Barugon Komikku Bājon?, lit. Fierce Monster Fight: Gamera Against Barugon - Comic Version) is a manga produced by Kadokawa based on the film of the same name. It attempts to take the story of the film and fit it into the Heisei timeline, setting it between the events of Gamera 2: Attack of Legion and Gamera 3: Revenge of Iris.

The manga picks up from the end of Gamera 2: Attack of Legion, with Gamera using his Mana Blast to obliterate the Mother Legion. Gamera then flies off to attack a swarm of Gyaos. Meanwhile, an expedition heads deep underground. Most of the expedition force dies from traps in the caves, but the survivors discover a massive skeleton with a giant jewel embedded in the front of its skull. Strange cave paintings adorn the walls, featuring various Gyaos fighting another giant monster. Several of the remaining survivors murder each other, and the last remaining explorers manage to extract the Gem from the skeleton's skull. It turns out that this is the egg of Barugon, which hatches. The hatchling grows gigantic at a remarkable rate, and then attacks the J.S.D.F. with his icy breath. Warships assemble in Tokyo Bay and attempt to bombard the creature, but Barugon uses his Rainbow ray to make the ships explode. Asagi contacts Gamera and tells him of Barugon's assault, and Gamera goes to fight Barugon, who has now engulfed Tokyo in an ice storm. Barugon's speed was increased in the storm, and he had the upper hand over Gamera. Gamera spins into Barugon and throws him towards the ocean. Barugon quickly escapes, but loses his tail from one of Gamera's plasma balls. Gamera is badly frozen, and leaves to recover. Eventually, Gamera returns, and the two monsters fight on a giant iceberg made by Barugon. Ultimately, Gamera is victorious, and Barugon falls into the ocean, never to be seen again.

Gamera is hit by Barugon

Zigra, Jiger, Iris, and Barugon
Add an image to this gallery

Retrieved from "https://godzilla.fandom.com/wiki/Gamera_vs._Barugon_(Kadokawa_Manga)?oldid=232857"
Community content is available under CC-BY-SA unless otherwise noted.