Express Engineering Corp is building a highway in the forest near Mt. Fuji. Challenged by local villagers, foreman Shiro Tsutsumi and his crew are plagued with protests and sabotage. Nearby, a survey team from the United Nations is killed when their helicopter is literally cut by a beam emitted from a cave in the mountains. A small boy, Eiichi Kanamura, grandson of the village elder Tatsuemon Kanamura, finds reporter Okabe snooping around. Okabe and Eiichi check out a strange light - which leads them to the cave where Gyaos, a giant bat-like bird-monster, is currently residing.

Running for his life, Okabe ditches Eiichi at the cave - but runs into Gyaos who devours him. Shiro and his crew (who are also checking out the light from the cave) arrive just in time to see an epic battle where Gamera and Gyaos exchange blows (with Eiichi in the middle). During the battle, it is shown that Gyaos can't withstand fire. Realizing this, Gamera grabs the young boy and gets him to safety. After alerting the public about Gyaos and his abililties, zoologist Dr. Aoki investigate Gyaos's prehistoric origins. The public is put on alert - stay indoors at night - Gyaos is nocturnal. But after another battle with Gamera, Gyaos seems to be the victor, as Gamera tends to his wounds at the bottom of the sea. Even after using light flares to annoy Gyaos, the Japanese Self-Defense Force is still annihilated by the monster.

After another battle, Gamera holds Gyaos in the water while the sun rises. But Gyaos, sensing its mortal danger, chooses to sever its own foot with its sonic beam in lieu of death and flies off. A plan is put into effect that would draw Gyaos into the sunlight after experiments reveal that the sun causes the severed foot to shrink. The Defense Force constructs a rotating platform with a giant bowl of synthetic blood on it. Gyaos, landing on the platform and drinking the blood, will become dizzy and not be able to get off before the sun rises. The plan ultimately fails, but Gamera arrives to do battle with Gyaos once more. During the battle, the sun rises, weakening Gyaos. Gamera seizes the opportunity and throws the weakened Gyaos into the crater of an active volcano, killing it. 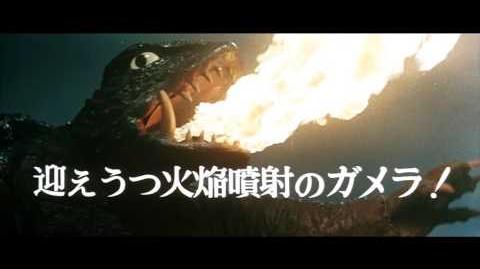 Retrieved from "https://godzilla.fandom.com/wiki/Gamera_vs._Gyaos?oldid=304673"
Community content is available under CC-BY-SA unless otherwise noted.