Workers from the World's Fair are interested in an embedded statue and try to remove it. Gamera arrives and attempts to prevent the removal of the statue, only to be shot at by the crew instead. The statue is removed from the island successfully after a volcano erupts.

After the statue is removed, Jiger makes her first appearance and gets Gamera's immediate attention. The first of several fights ensues, and Jiger wins by shooting projectile quills from her face. The quills impale Gamera's arms and legs, piercing all the way through and preventing Gamera from withdrawing his limbs into his shell and taking flight. To make matters worse, Gamera is on his back and cannot move. He pulls himself up with his tail using a large rock and then removes the offending quills from his limbs and is finally able to fly after Jiger.

Meanwhile, Jiger is actively seeking the statue, because it is making a horrible ringing sound that is causing her tremendous pain. Jiger lets nothing impede that hunt as she splits two ships in half and starts tearing through Osaka. Scientists are beside themselves as Jiger displays another weapon: a heat ray that vaporizes not only flesh but entire city blocks. The JSDF does make a token effort to kill the kaiju, but her quills knock down the F-104 fighters, ending that involvement.

Gamera returns for round two as the fight is witnessed by several children. Gamera knocks Jiger around and appears to have the upper hand until Jiger pulls Gamera to her. Jiger extends a stinger from her tail and inserts the barb into Gamera's chest, laying an egg inside his lung. Gamera staggers away, roaring in agony. Finally, he barely makes it to the bay and his body turn a chalky white color, almost like ice. Gamera is presumed to have been killed at this point as Jiger heads straight to the World's Fair. Jiger finally obtains her goal of the statue, and throws it into the ocean, ending the painful noise.

The film was released in the United States under the title "Gamera vs. Monster X."

In 2010, Shout! Factory officially released Gamera vs. Jiger to DVD as a double feature with Gamera vs. Guiron. 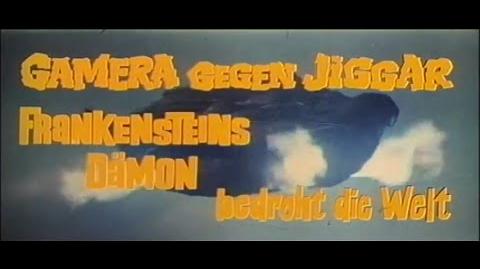