Gamera vs. Viras (ガメラ対宇宙怪獣バイラス,   Gamera Tai Uchū Kaijū Bairasu?, lit. Gamera Against Space Monster Viras), released in the U.S. as Destroy All Planets, is a 1968 tokusatsu kaiju film produced by Daiei Motion Picture Company and the fourth entry in the Gamera series.

A deadly alien force approaches earth. Gamera intervenes and destroys the alien vessel; but before the ship is destroyed, the aliens broadcast a warning to their world - stating Gamera as their enemy. Later on Earth a Boy Scout troop is visiting an aquarium to visit the scientists working on a small two-man submarine. Masao and Jim, two of the scouts manage to talk their way aboard the sub. While in the water they spot Gamera - who engages in a little race with the boys. However, their hijinks come to an end when the second alien vessel envelops the both of them in a "super-catch" ray. Releasing the boys, Gamera remains trapped in the force field while the aliens scan his memory-waves. They learn one of Gamera's few weaknesses, his love for children. Soon after, the field weakens and Gamera is free. The aliens capture Jim and Masao, threatening to kill the boys. Powerless, Gamera lands. Attaching a brain-wave control device to Gamera's head, the aliens force Gamera to do their bidding.

While aboard the spaceship, the boys continually try to escape. Gamera, however (under the influence of the Virasians) is destroying dams and cities by the handful. Tim and Masao meet a strange squid like creature, thinking it is actually another captive of the aliens. In fact it is Viras, the leader of the aliens. The boys help Gamera break from the brain-wave device, and he begins to attack the spaceship. Grounded by Gamera, the aliens reveal that their humanoid forms were just hosts for more squid-like aliens. The aliens form together making a Gamera-sized creature, Viras. The two duke it out in a big beachside battle. Viras tears apart Gamera's belly by turning his mantle into a blade, but Gamera grabs his giant opponent and lifts them into the stratosphere, where they become frozen. Gamera then drops Viras, where they then die after slamming into the ocean.

In 1969, Gamera vs. Viras was released in the United States by American International Pictures under the title Destroy All Planets, likely to capitalize on the success of that year's Godzilla film, Destroy All Monsters. 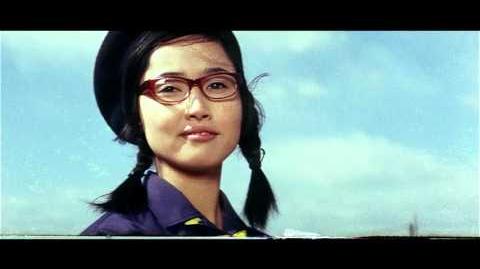 Retrieved from "https://godzilla.fandom.com/wiki/Gamera_vs._Viras?oldid=392408"
Community content is available under CC-BY-SA unless otherwise noted.