Gamera: Super Monster
Gamera vs. Zigra (ガメラ対深海怪獣ジグラ,   Gamera tai Shinkai Kaijū Jigura?, lit. Gamera Against Deep Sea Monster Zigra) is a 1971 tokusatsu kaiju film produced by Daiei Motion Picture Company and is the seventh entry in the Gamera series. Gamera vs. Zigra was released in the United States in 1985 by Sandy Frank through King Features Syndication.

Without warning, an alien creature known as Zigra attacks a moon base. Soon after (back on Earth), Kenny and his friend Helen, along with their fathers, see a strange spaceship (Zigra's) descending into the ocean. Investigating, they are soon captured and instructed to tell the world of Zigra's great achievements in science. The Zigra "space woman" creates a gigantic earthquake ("magnitude 18 no less") and they learn of Zigra's past history, advancing in science and destroying their planet. Searching out a new home, Zigra found Earth and orders the "earth creatures" to surrender the Earth. While speaking with Earth, Tom declares the Zigra woman is crazy. In anger, she puts the men in a hypnotic state. Kenny and Helen take action, successfully using the ships console to escape. Enraged, Zigra orders their death. He sends the woman to kill the children. After a close call on the surface of the water, Gamera saves the children and their fathers from Zigra. After questioning the children, the UN decides to attack Zigra. The jets scramble.and Zigra makes short work of them with his laser beam. The Zigra woman, disguised as a babe (she stole some unlucky gal's bathing suit), searches for Kenny and Helen. She hitches a ride with the Sea World dolphin trainer back to the facility. She changes into another stolen out fit and proceeds to wander the facility which is now crawling with military. She overhears the exasperation of the UN's fruitless efforts to defeat Zigra. While chasing the children, some photographers identify the Zigran woman as Lora Lee. After ditching the Zigran woman, the children call for Gamera. Gamera begins an underwater assault on the Zigra spaceship, which retaliates until transforming into a shark-like monster. The battle continues until Gamera beaches Zigra, who then retaliates sending Gamera into the sea for recuperation. Zigra threatens again, claiming to be all-powerful.

Back at Marine World, the dolphin trainer and the scientists divulge a way to break the control with "sonic waves." They use this information to disable the Zigra woman. Lora Lee, it is discovered was brought aboard Zigra's ship when he attacked the moon base. The scientists go to look for Gamera, hoping to work with him to defeat Zigra. But as the bathoscope is trying to revive Gamera, Zigra attacks them - again demanding the immediate surrender of the Earth.

An electrical storm appears above the bay and a bolt of lightning somehow revives Gamera and he snatches the bathoscope and returns it to the surface while Zigra is sleeping. Gamera returns to the sea to face off against Zigra for the final battle. 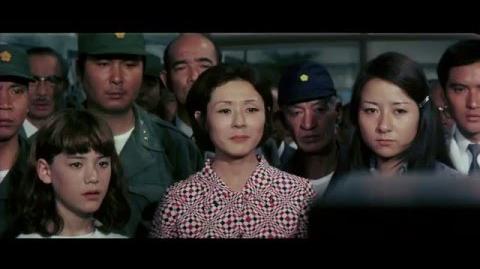 ガメラ対深海怪獣ジグラ 予告篇
Gamera vs. Zigra Japanese trailer
Add a photo to this gallery

Retrieved from "https://godzilla.fandom.com/wiki/Gamera_vs._Zigra?oldid=392663"
Community content is available under CC-BY-SA unless otherwise noted.