Start a Wiki
Gandora is a serpentine kaiju that first appeared in The Godzilla Comic.

Gandora has a long, serpentine body with four large plates located in the mid-section of its body which it can close around either its head or tail. These are used for both offense and defense. Gandora is also capable of flight.

In the comic Gandora appears and fights Godzilla, trapping him inside its armor plates. Godzilla manages to break free of these plates though and manages to kill Gandora. 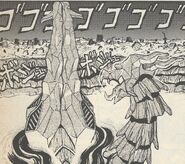 Add an image to this gallery
Retrieved from "https://godzilla.fandom.com/wiki/Gandora?oldid=365110"
Community content is available under CC-BY-SA unless otherwise noted.