An expedition from Tokyo heads to Obelisk Island, which the greedy Mr. Funazu, president of "Playmate Magazine", wants to turn into a resort. The natives of Obelisk welcome the expedition, but two members, Hiroshi and Itoko, venture into a forbidden area despite the pleas of a native boy named Saki. They enter a cavern blocked by a fallen statue and find a giant egg, out of which hatches a baby monster, referred to as a "Gappa". The natives plead with the skeptical scientists not to take the baby away, lest it anger the baby's parents. Sure enough, they take the baby away, and soon, inside the caverns, its two parents rise from the underground waters beneath the volcano, destroying everything in their path. Saki, the only survivor, is rescued by an American navy fleet and brought back to Japan.

Meanwhile, back in Japan, the baby monster is making world headlines, not to mention being experimented on by scientists. To the shock of the expedition members there is news of two giant flying creatures appearing over Sagami Bay. The Gappa parents ravage cities looking for their offspring, and are impervious to military weapons. Hiroshi, Itoko and Professor Tonooka (a scientist from the expedition) realize that the "Gappas" aren't a legend after all. They, and Saki, try to convince the headstrong Mr. Funazu to let go of the baby and return it to its parents. Will they convince him before the Gappas destroy Japan and perhaps the world?

Gappa was the fifth and final kaiju film project idea that Nikkatsu had come up with, after Giant Monster Gigant, Giant Squid Monster Arkitius, Giant Monster Momonra, and Reigon: Devil of the Seabed. Planning for all the unmade films was done by Hideo Kodama.[1] 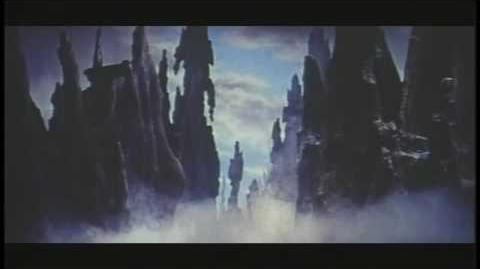 This is a list of references for Gappa (1967 film). These citations are used to identify the reliable sources on which this article is based. These references appear inside articles in the form of superscript numbers, which look like this: [1]