Gezora, a giant mutated cuttlefish, was taken over by an alien from outer space known as Yog.  Controlled by Yog, he was used to attack Sergio Island. Gezora damaged many buildings and killed several people, but the natives and some Japanese citizens lured him to a field covered in gasoline from an old munitions dump. The gasoline was lit, setting Gezora ablaze. With massive burns and sores covering its body, The giant cuttlefish ran back to the sea, where it presumably died. Yog escaped, and travelled back to the island to continue his attack.

One of the first enemy kaiju facing Godzilla and Mothra is the giant cuttlefish, Gezora. Gezora is an extremely agile opponent, constantly leaping across the stage by expanding and retracting its legs. Gezora can extend one of its tentacles to try and lash out at the opponent. However, Gezora lacks the ability to deal Godzilla or Mothra any kind of real damage, and possesses very little threat; furthermore, Gezora always has the least amount of life of any of the enemy kaiju on a given world, unless the 'DESTR0Y ALL M0NSTERS' code is used on the password screen. Gezora takes advantage of a glitch in the game's programming and can trap the player's monster in the corner of the stage by repeatedly slapping them with his tentacles, thereby not allowing them to attack, and buying Gezora enough time for the turn to end so it can regenerate some of its lost health.

Gezora in Godzilla: Monster of Monsters

Gezora appears in IDW's Godzilla: Rulers of Earth. Gezora first appears in issue #3, where it and Manda attack the U.S.S. Goldstein while under the control of the Devonian aliens. Gezora reappears in issue #9 where it along with Manda and Titanosaurus attack a naval fleet assembled near where Godzilla fought Biollante. In the following issues, Gezora is one of the monsters protecting the Devonian capital. Gezora, Manda, Destoroyah, and Titanosaurus battle Godzilla near the Devonian capital in issue #12, and all except Destoroyah escape with their lives when their alien masters' base is destroyed. It is likely that Gezora, along with the other freed monsters, went off to their oceanic homes. Four years later, a Trilopod was seen with Gezora's characteristics, indicating that the Trilopods had at some point encountered Gezora and absorbed its DNA. Despite this, Gezora was never seen inside the Trilopod hive nor did it take part in the final battle between the Earth monsters and the Trilopods.

Gezora's roars were later reused for the popular Ultraman series kaiju Bemstar. The breathing noises Gezora makes were used for Hedorah in Godzilla vs. Hedorah. 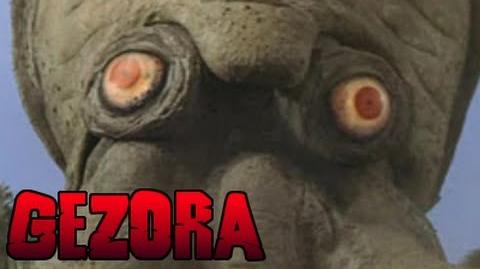