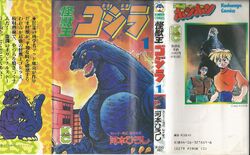 The manga showcases Godzilla squaring off against various kaiju (who are revived or genetically altered by a mad scientist called Oniyama) in extremely violent and bloody battles. The monsters Godzilla defeats are usually defeated by his Atomic Breath, and most of the enemy monster's attacks focus on Godzilla's chest, usually causing dramatic injuries.

A mad scientist named Doctor Oniyama attempts to take over the Earth, and wants to use Godzilla as his main pawn. To get the beast, though, he has to deal with a young boy, Miko Hideo, his friends, and Godzilla himself. Reviving and altering the DNA of several monsters including Megalon, Biollante, Gigan, and others, he attempts to use a time machine to alter the past. The manga ends when Godzilla, King Godzilla and Oniyama fall into the crater of a volcano.

Godzilla is awoken from his slumber after the fight between himself, Mothra and Battra. Making his way inland, he fights several other monsters. The series ends with a brutally wounded Godzilla fighting a genetic twin of his, King Godzilla, and both falling into a volcanic crater.

Using the corpse of the original Baragon from 1965, Doctor Oniyama splices its DNA with that of a walrus and narwhal to create a Sea Baragon. Sea Baragon is the first foe of Godzilla in the series and has no special powers, instead opting for brute force and stabbing attacks using its horn.

A revived Biollante called Neo Biollante appeared shortly after death of Sea Baragon, and was joined by Megalon in battle against Godzilla. Despite being rooted to the ground and weighing much more than twice his weight, Godzilla was able to lift and throw Biollante. She retains most of her powers from her film incarnation, and her Corrosive Sap plays a vital role in helping Godzilla defeat King Godzilla. She was killed by Megalon after he accidentally used his Horn Lightning on her after Godzilla threw her at him. Biollante's DNA was later revealed to be part of King Godzilla's genetic makeup, and her head was used as his ultimate weapon, being repurposed to fire a powerful beam from his chest.

Megalon surfaces and fights Godzilla, who was fighting with a revived Biollante, accidentally killing her with his horn lightning. Godzilla then broke off Megalon's horn and destroyed him with his atomic breath. It is unknown if this is the same Megalon from 1973.

A Rodan appears under the control of Doctor Oniyama, flying across Tokyo and dropping large bombs from his talons. He later attacks Godzilla while he is out at sea and carries him off, only to get slammed into the ground and get his wing torn off by Godzilla.

Unlike the original Anguirus, this one was a new species on display at a Dinosaur Expo Festival whose remains where irradiated by Doctor Oniyama to turn into a kaiju. It was killed when Godzilla rammed one of Rodan's extra bombs down its throat. Unlike its counterparts, this version of Anguirus can tuck its head and limbs into its body to spin rapidly.

Gigan travelled to Earth with King Ghidorah. He appears to have been refurbished, and has a variety of powers that he originally didn't have. He was ultimately defeated by Godzilla in the second volume.

First appearing in a South Pacific Beach resort, a member of the Ebirah species was given insect-like wings by Doctor Oniyama, who claims insects and crustaceans are very similar. It used its new wings to fly around and stab at Godzilla, but was impaled on a palm tree and having its new wings torn off by Godzilla. It was then frozen and destroyed.

Appearing shortly after the defeat of Flying Ebirah, Neo Gigan was lent to Doctor Oniyama by the Nebulian Space Hunters to fight Godzilla. Due to the liquid nitrogen that was used to freeze Ebirah cooling the area around it, Godzilla was forced into a hibernation-like state, which Neo Gigan took to its advantage, attacking Godzilla. Neo Gigan was later torn in half by Godzilla's brute force. Unlike the original Gigan, Neo Gigan could fire heat beams from its claws, launch its hooked hands, and napalm arms.

A powerful MechaGodzilla controlled by G-Force, Machine G was sent by the G-Force to battle Godzilla along with a jet mounted with cannons. Later on, he was deployed by the G-Force again, this time to help Godzilla in his fight against Oniyama's finest creation, King Godzilla. He was nearly destroyed by King Godzilla, but managed to break free and assist in steadily disarming the clone's abilities.

The same Battra from 1992 is mentioned but only when Doctor Oniyama uses its brain and wings to enhance his "King Godzilla" monster.

King Godzilla is a monster created by Doctor Oniyama that had the body of Godzilla, two heads and legs from King Ghidorah, and the wings and brain of Battra, and the concealed head of Biollante. Godzilla, weakened from his nonstop brawling stood no chance, until Machine G appeared to assist him. King Godzilla managed to regenerate almost any damage incurred upon him, forcing Machine G to stall the clone until Godzilla, mortally wounded by a set of spikes that King Godzilla dropped him onto, managed to throw himself into a active volcanic crater whilst holding King Godzilla. King Godzilla, Godzilla and Oniyama fell into the crater and all burned to death.

Megalon rises from underneath the ground

Godzilla hefts Biollante, despite her immense weight and size

Megalon fires his Lightning Bolt at Godzilla, but it disintegrates Biollante instead

MechaGodzilla III has part of his casing removed after Godzilla throws Mechani-Kong II at him, showing his mechanisms underneath

Rodan carries Godzilla away, with a Fighter Jet in hot pursuit

Anguirus emerges from the ocean, and starts trashing Tokyo

Anguirus ripping into Godzilla's chest with his spikes

Anguirus has one of Rodan's shells shoved down his throat

Anguirus explodes after the shell Godzilla shoved down his throat explodes

King Godzilla
Add an image to this gallery

Retrieved from "https://godzilla.fandom.com/wiki/Godzilla,_King_of_the_Monsters_(Kodansya_Manga_Series)?oldid=223668"
Community content is available under CC-BY-SA unless otherwise noted.