72 pages
Godzilla: Awakening is a graphic novel by Legendary Comics and a prequel to Legendary Pictures' 2014 MonsterVerse film, Godzilla. It was released on May 7, 2014.

In 1980 Tokyo, Ishiro Serizawa meets with his father Eiji, who asked him to come urgently. Eiji begins telling Ishiro about his job, the one he had kept secret from him. He begins his story in Hiroshima, on August 6, 1945, at 8:15 AM. After the atomic bombing of the city, Eiji went looking for his wife and newborn son but only found his son. After finding him, he sees a creature in the air, "summoned by our own monstrosity," who flies away, with something in the water observing.

Eiji left Ishiro off with his grandparents for his safety and continued working in the Japanese Navy. One year later, he and his fellow sailors are sent to provide aid to an American vessel that sent a distress call from a nearby island. After finding one of the American men, the sailors find the wrecked ship deep inland and are attacked by the Shinomura. They go inside the ship to rescue the men trapped inside but the Shinomura throws the ship down at the sea, sinking it. No one but Eiji and the one American they rescued, named Shaw, survives. Shaw, impressed with Eiji surviving, offers him go work for the U.S. government, which Eiji accepts as Godzilla looks on at the Shinomura flying away.

Later, Eiji becomes part of the first Japanese-American military unit since Japan's surrender in World War II: Monarch. General MacArthur explains that the job of the Monarch unit is to kill the Massive Unidentified Terrestrial Organisms in secrecy to avoid world-wide panic. Shinomura attacks places all around the Pacific Ocean each year following, starting with Russia the Philippines in 1946, Western Australia in 1947, Moansta Island in 1948, New Zealand in 1949, Yap in 1950, and Guam in 1950. Every time Shinomura attacked, eye-witnesses reported both it and a giant crocodile-like creature which chased the Shinomura away. Eiji believes that the monster, which one of Guam's people call "Gojira," a combination of the Japanese words for gorilla and whale, actually exists, while the rest of his team doesn't. Eiji gets some people to go down in the ocean and to find Gojira using the first nuclear submarine, the U.S.S. Nautilus, but after weeks of searching, Gojira isn't found.

Three years later in 1953, Eiji is playing with Ishiro, as Shaw comes and tells Ishiro he has to take his father for "shipping company business." At Monarch headquarters, Eiji meets with Doctor Zamalek, who shows him and others a giant cell discovered in the Philippines from the Shinomura. Doctor Zamalek then exposes it to a beam that makes it grow, but it is set on fire and presumably killed. Eiji comes up with the name shi no mure for the super-organism, and Zamalek claims that they don't understand why it hasn't taken over the world yet, which Eiji answers to with Gojira. Eiji points to depictions of Gojira throughout history and believes he is from a time when the Earth was ten times more radioactive than today. 250 million years ago, a Shinomura unknowingly landed near Gojira and gets blasted by his atomic breath and sent down a cliff just as a meteor hits the Earth, diminishing atmospheric radioactivity forever, and forcing large creatures that fed on radiation like Gojira down closer to the Earth's core. Shinomura and Gojira were awakened with the atomic bombing of Hiroshima, the radiation it released. Every time Shinomura attacked, Gojira drove it away. Eiji wants to find Gojira and let him fight the Shinomura, but no one believes Gojira exists.

Eiji goes back with Ishiro who put an injured sea star in his fish tank. Ishiro explains to his father that sea stars can regenerate, even an entire body if they need to, just as the "dead" Shinomura cell at Monarch HQ regenerates. Ishiro and Eiji hear a sound but Eiji assures Ishiro it's probably just the wind as the Shinomura flies past the window. Monarch headquarters has been destroyed. Eiji is back there with Shaw, who believed the Shinomura was destroyed, but Eiji explained that even with microscopic remnants it can regenerate. Eiji asks to find Gojira, which Shaw allows but lets him know that he will be alone at sea looking for Gojira. Eiji says goodbye to Ishiro and goes out to live in the ocean alone on a ship, looking for Godzilla.

A year later, in March of 1954, both Shinomura combine into one on Monsta Island as Godzilla rises from the ocean and engages it in battle. A boy sees them and tells Papa Brava, who notifies "the monster man", Eiji, who in turn alerts Shaw and Monarch. Godzilla and Shinomura's battle rages on, setting a section of the island aflame as Eiji reaches the island. Godzilla separates the two Shinomura with his atomic breath and kills one with another blast. As Navy ships arrive, the other Shinomura escapes, which only Eiji sees, and Godzilla follows, having been seen by Monarch and therefore now proven to exist.

The next day, the Shinomura carcass is found and shown to Eiji, who says he saw one fly away. Days later, the military decide to intercept Gojira in Bikini Atoll. Eiji insists on letting Godzilla kill the other Shinomura and let him return to where he came from, but they say it's too risky. Just then, General MacArthur arrives at a helicopter and gives them permission to nuke the MUTO. Eiji stops MacArthur, saying he has some concerns, and MacArthur says that he knows he does--that he's thought of the bombing of Hiroshima every day since 1945, but he also spent those years working to build a modern world which he'd kill to protect.

At Bikini Atoll, Eiji convinces the natives to leave. Later on, the Castle Bravo "test" is conducted, killing the Shinomura and presumably Gojira, but Eiji assures Ishiro that he's still alive as he finishes his story. A year passes and Eiji passes away and is buried in the Yanaka Cemetery. After the burial is over, Ishiro is approached by Shaw, and Ishiro, knowing the truth, tells Shaw that he's ready to join Monarch, but Shaw claims that he's not sure "anyone's ready for what's coming." 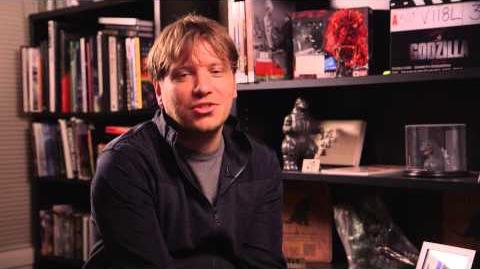