Godzilla: Planet of the Monsters

Godzilla: The Planet Eater
Godzilla: City on the Edge of Battle (ＧＯＤＺＩＬＬＡ決戦機動増殖都市,   Gojira Kessen Kidō Zōshoku Toshi?), is a Japanese animated tokusatsu kaiju film produced by Toho Company Ltd. and Polygon Pictures. It is the 33rd film in the Godzilla series and acts as the sequel to the 2017 film, Godzilla: Planet of the Monsters.[1]

The film was directed by Kobun Shizuno, Hiroyuki Seshita, with a screenplay written by Gen Urobuchi. City on the Edge of Battle continues where Planet of the Monsters left off, and sees the survivors in the wake of Godzilla's attack searching for the remains of Mechagodzilla, an anti-Godzilla weapon, once thought lost.

This film was followed by a sequel, Godzilla: The Planet Eater, which was released on November 9, 2018, and acted as the final film in the animated Godzilla trilogy.

The film begins shortly following Planet of the Monsters, with the crew of the Aratrum debating on what to do. They settle on waiting 48 hours for any sign of survivors, before they'll leave Earth and settle elsewhere. Meanwhile, Haruo Sakaki wakes up in a hut, regains his bearings, and attempts to exit the place, only to startle a girl who was returning there. He chases her, and after a short time, the two talk, with the girl obviously not knowing much Japanese. Following this, she runs off, and Haruo follows, only to run into a group of his friends and survivors, including Yuko Tani, Rilu-elu Belu-be and Adam Bindewald, who're then taken in by a tribe of indigenous people.

When the group enters the caves where this tribe lives, they meet back up with Martin Lazzari and Mulu-elu Galu-gu, alongside more survivors. Haruo questions where Metphies is, and the group mulls over the tribe's intentions. Eventually, another girl and an escort leads them to a large chamber, where a telepathic conversation takes place. The human survivors state they don't intend to hurt the tribe and only wish to stop Godzilla, with the tribe remaining skeptical. Eventually, the group is let go and given their weapons, and Miana and Maina, the twins encountered earlier, offer to come with the group on their journey to find a way to stop Godzilla, while also coming across Metphies during a battle with the Servum.

The group, now fully back together, contacts the Aratrum, and after a group pep talk, Haruo convinces all but three people to stay and fight, over returning to the ship. The people remaining on Earth follow the Houtua twins and eventually find a cave system leading to a massive city made of nanometal, promptly dubbed Mechagodzilla City. The twins refuse to enter, deeming it "sinister" and "poison" but the rest trudge on, eventually finding assimilated bodies within the large, fortress-like structure, alongside the destroyed body and intact head of Mechagodzilla. The two Bilusaludo get to work on reformatting the nanometal to rebuild a command post for the group's use, and also commission new vehicles, the Vultures, using the Exosuit as a base in its construction.

Concerns around Mechagodzilla and the nanometal are raised, with Martin reporting poor physical health from soldiers within the complex, which is seemingly linked to the Houtua's powder-like dust they treated them with. Metphies on the other hand, thinks of it as a monster in its own way, while he also felt the two Bilusaludo were just making the same mistake that resulted in Godzilla in the first place. Metphies then entrusted Haruo with the name of a terrifying power, the one that destroyed his civilization. Later that same night, Yuko and Haruo would share a kiss, following Haruo's promise to Yuko that she'd see Earth as it once was, when they won.

With Mechagodzilla City up and operational, the nanometal is utilized to begin constructing armaments and defenses to attack and counter Godzilla Earth. Additionally, a new weapon, an EMP harpoon, is developed, which is similar in design to the EMP probe. The plan to take down Godzilla is explained, being fundamentally identical to the one used against Filius just days prior, albeit on a larger scale. This involves luring Godzilla to a trap point, and using nanometal to freeze him in his tracks, long enough for what is described as an "overwhelming material warfare" strategy to commence, where the city's firepower is used all at once, alongside the harpoons to overload Godzilla.

Following this, Godzilla awakens from his slumber and begins moving on the city, having discovered its location. After an atomic breath salvo is shot towards the city, to no effect, Earth simply moves forward on the city, and the three Vultures, helmed by Belu-be, Yuko and Haruo are launched with the intention of distracting the monster. Eventually, Godzilla's lured to the diversion point, and much like last time, Godzilla's led along a narrow path, which ends with a dead end. The exit to the area's blocked, trapping the monster, and nanometallic liquid's poured into the arena, which quickly fills up to the monsters ankles, before hardening, stopping his movement entirely.

The city's defenses are then utilized, which overwhelm Godzilla easily and begin whittling away at his dorsal plates, leaving him vulnerable, and without a shield. The harpoons are then launched, which skewer Godzilla and begin an overload, with Godzilla hunkering over in pain, as his body begins to glow a vibrant red. However, there's no explosion, and Godzilla remains motionless, only developing a superheated dome around himself, which results in the Vultures having to retreat. It's determined that Godzilla is merely attacking them in a new fashion, and the entire city's temperature begins to rise. Galu-gu merely subjects himself to the nanometal, much to everyone else's horror, and the retreating group is then led away from the city by Metphies.

A few last ditch effort plans are put into motion to stop Godzilla, but are thwarted by the sheer heat given off by the monster. It's determined that using the Vultures as a makeshift spear can work, provided the users are taken over by nanometal to last long enough to perform the task. The Vultures and their pilots are then forcefully subjected to nanometal assimilation. Belu-be's assimilation is harmless, while Haruo finds out he's immune to the substance, and Yuko begins to succumb to it, leaving her dying in her mech, which Haruo carries with his own. Metphies then intervenes, and after Haruo demands Galu-gu stop the assimilation attempt to no avail, Haruo destroys Mechagodzilla City's command structure, killing Galu-gu and stopping the process. Belu-be perishes shortly after as the nanometal is destroyed.

Godzilla's superheated dome then collapses, with the burning titan beginning to raze the city with swipes of his atomic breath, leaving it melting and sinking, as he stands victorious once more. Haruo is then seen with Yuko, where he sees she's perished in spite of all he did, leaving him to do nothing but scream in anguish. The film then ends on a flashback note, with Metphies speaking to Haruo about a power much more terrifying than Godzilla, which lurks in space. He leans in to whisper its name to Haruo, that being Ghidorah.

The film was announced on November 17, 2017, the day of Planet of the Monsters' release in Japan, alongside a teaser poster for the film, which teased the Toho reboot series' incarnation of Mechagodzilla.

On February 12, 2018, concept art of a cave environment from the film would be posted to the Godzilla anime's Twitter.[3]

On February 17, the statue of the anime Godzilla meant for film promotion was unveiled, having been redesigned to fit the aesthetic of Godzilla Earth, over the previous design of Godzilla Filius. The redesigns included a slight paint job alteration and added chin spikes.

The film's release date was announced on March 5, 2018, being May 18, 2018. The news came alongside new concept art for the film featuring Godzilla Earth, standing in a mountainous region. In addition to this, a synopsis for the film would be unveiled alongside this, revealing a small portion of the film's plot.[4]

On March 19, 2018 a large overhaul of both the film's official Twitter and site occurred, with a new poster being unveiled, showing off Mechagodzilla, and the film's cast. The film's official English title was also confirmed, being Godzilla: City on the Edge of Battle.[5] Additionally, it was announced that Xai would return to the anime series to create the sequel's theme song, "The Sky Falls", following Planet of the Monster's "White Out".[6]

March 27 ended with additional concept art being unveiled for the film, this time of a Houtua tribe living space.[7]

On April 19, just under a month before the film's release, a trailer was released to the public. It contained shots of a new, flying mech, Mechagodzilla in a deactivated state, Miana and her sister, Maina, alongside their tribe, and shots of Godzilla Earth attacking and being attacked, with the final shot of the trailer showing the monster's body and surrounding environment looking charred from an unknown, devastating attack. This trailer featured the debut of the song, "The Sky Falls". 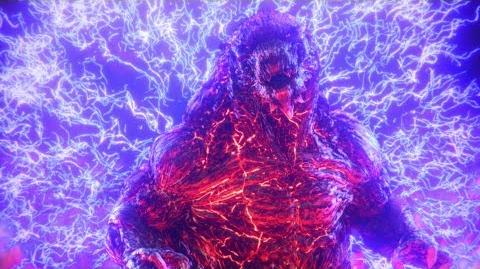 Godzilla City on the Edge of Battle - Trailer 1

On the same day, it was announced that work on City on the Edge of Battle had finished.[8]

On April 28, 2018, director Hiroyuki Seshita announced that City on the Edge of Battle's dubbing was completed.[9]

One day prior to City on the Edge of Battle's Japanese release, a second trailer for the film came out, teasing more of the film's plot, and content. It also provided some extended sequences of atomic breath use, the Vultures, and overlaid every major member of the cast with crediting. 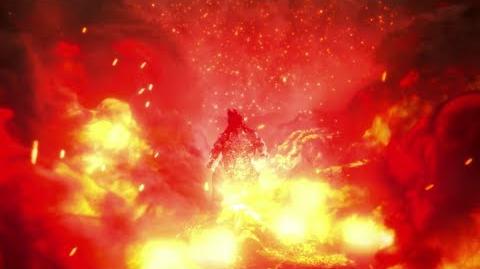 Godzilla City on the Edge of Battle - Trailer 2

The film's North American Netflix release date was announced on July 6th, being July 18th, just under two weeks from the unveiling.[2]

City on the Edge of Battle received mixed to negative reception. Criticism from the fanbase has been aimed mostly at the portrayal, or lack thereof of Mechagodzilla, in spite of its presentation in the film's marketing campaign.

IGN Japan's review, written by Naoya Fujita, gave the film a 4.5 out of 10, deeming the film a total failure and waste. Criticism here was levied towards the film's protagonist, and his cohorts, who's motivations are deemed unclear.

More criticism was pushed on the lack of motivation to care for what the protagonists are fighting for: Earth, nor to their base of operations, Mechagodzilla City. Additionally, the film was said to have lost an opportunity to make the story hook exciting.

Praise was pushed towards the film's themes, however, with the reviewer praising the dynamic between humanity and the Bilusaludo, along with the religious hook of the Exif.[12]