After failing to invade the Earth in 2002, the Vortaak return to Earth two years later with all of the monsters under their control, with their ultimate weapon, SpaceGodzilla. The player assumes the role of a monster who has broken free of the control, regardless of what monster is picked. If the player completes the game on hard mode with Godzilla 2000, a cutscene will be shown where Godzilla creates a black hole by blowing off SpaceGodzilla's shoulder crystals, which sucks him in, thus saving the world.

The original story during development was much more elaborate, involving the Vortaak infiltrating human society to steal G-cells.

Most of these monsters appear in the sequel, Godzilla: Unleashed.

Biollante in Godzilla: Save the Earth

These can be changed from day to night.

Statue Level was a level briefly described in an interview and seen in concept art that would have involved fighting Destoroyah while trying to activate a statue of Jet Jaguar.

Rodan Railer was a railer seen only in concept art similar to the Godzilla 2000 and M.O.G.U.E.R.A. ones, set in a desert.

Las Vegas is seen in concept art for the game. Toho Kingdom has this screenshot and it is unknown if it is the only concept art of Vegas. The art shows Godzilla 1990's holding the Hard Rock Hotel's guitar, prepared to use it against Mecha-King Ghidorah.

An Ice Level set in Antarctica is shown in two pieces of concept art, one of Titanosaurus and other monsters battling it out. The second includes a description of gameplay in the level. It is a picture of Godzilla 2000 falling into an ice flow with Kiryu watching. It reads "Monsters can fall through ice flow hazards. They will re-emerge in the ocean section of the arena." It is unknown why such an interesting level was cut.Template:Citation needed

Many of the game's elements were scrapped, due to a combination of time constraints and licensing issues. This was possibly due to Atari rushing the game in order to coincide with the release of Godzilla: Final Wars in 2004.

Biollante was scrapped prior to release despite being fully completed and the whole story, shown above, was cut, even though most of the time spent on the game was on the story mode. Simon Strange was a man who worked on the game, and he stated that it wasn't the "feel good" project that Godzilla: Destroy All Monsters Melee was. Las Vegas, a city, was cut, the Rodan railer was cut; the list goes on.

There was originally going to be a robust tokens system, but it was eventually cut. Most of the cut-scenes were deleted along with the story, and the special effects for Anguirus' roar were changed.

Art for the cover of the Japanese version

The PlayStation 2 cover for the Japanese version

Godzilla: Save the Earth PlayStation 2 Cover

Gameplay of the Japanese version 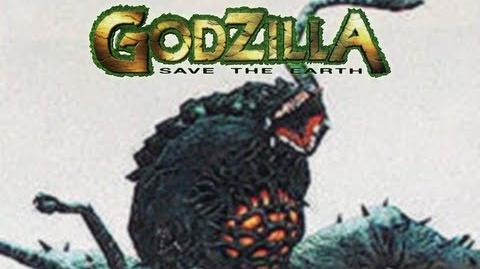 Biollante Gameplay in GODZILLA SAVE THE EARTH ~ Gigan VS. Biollante 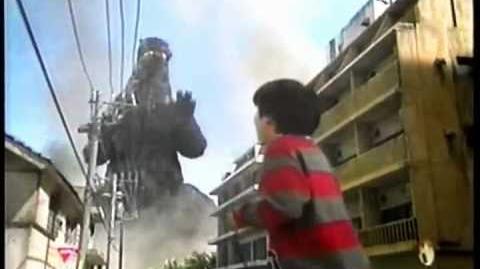