Godzilla: King of the Monsters
Godzilla: The Planet Eater (ＧＯＤＺＩＬＬＡ星を喰う者,   Gojira Hoshi o Kuu Mono?), is a Japanese animated tokusatsu kaiju film produced by Toho Company Ltd. and Polygon Pictures. It is the 34th film in the Godzilla series and acts as the sequel to the 2018's Godzilla: City on the Edge of Battle, and also as the final installment in the animated Godzilla trilogy.

The film was released on November 9, 2018 in Japanese theaters, with a North American release occurring on January 9, 2019.

The film was directed by Kobun Shizuno, Hiroyuki Seshita, with a screenplay written by Gen Urobuchi. The Planet Eater follows City on the Edge of Battle, and sees Godzilla Earth fighting his ultimate nemesis, King Ghidorah, while the remaining forces on the planet attempt to figure out a way to stop them.

Following the fall of Mechagodzilla City, Martin Lazzari and another soldier are seen monitoring Godzilla, confirming it was alive. The crew of the Aratrum are then seen running over the final moments of Mechagodzilla City and the Bilusaludo commanding it, with Halu-elu Dolu-do damning Haruo Sakaki as a traitor, and Takeshi J. Hamamoto supporting Haruo. As a fight breaks out over the ethics of the situation, Endurph leaves.

Haruo and Martin are then shown on Earth, tending over Yuko Tani. It's deduced that the nanometal eroding her body is the one thing keeping her alive, but that she is clinically brain dead. Metphies and Adam Bindewald enter, with the latter deeming Yuko's circumstances as a punishment for her sins, and Haruo's survival as a gift of grace.

Later, Martin reveals he was able to recover one of the Vultures from Mechagodzilla City, however, he is unable to reboot it, with the vehicle's controls also being locked, following the city's destruction. During one of Metphies' religious group talks, Martin pulls Haruo aside, and speaks up about how it wasn't divine intervention that saved Haruo, but the Houtua and their medicinal prowess. Haruo would then confront Metphies on this, who would explain he knows that gods had nothing to do with Haruo's survival, but he spread the idea as a means to unite everyone for a future battle with Godzilla.

Back on the Aratrum, the Bilusaludo begin a revolt in response to Haruo's actions and the lack of condemnation from humans on the committee, leading to the ship's power being turned off. On Earth, Martin devises a plan to cool things down on the Aratrum, involving feigning Haruo's escape to hopefully allow a compromise to be reached, with Miana assisting in providing Haruo a place of residence far away from the action. When the two are alone, both speak on Haruo's internal conflicts, determining that "winning" is prosperity, living on, and procreating, while "losing" is dying, and disappearing. Eventually the former makes sexual advances on the latter, but is turned down.

Endurph and Metphies then speak telepathically, with the latter saying he needs more time to prepare the offering, being a single Earthling. Endurph would allow him to proceed, and Miana would intervene, sensing the Exif's telepathy. Back at the Houtua hut, Haruo would then be approached by Maina, and the two would engage sexually. Meanwhile, Metphies and Miana would speak, with the Houtua questioning the Exif's intentions and where he was leading his followers. Threatening to make her a sacrifice, Miana would attempt to flee, but instead would be restrained and forced to bear witness to a vision of Ghidorah.

Haruo and Metphies would then meet, with Metphies questioning if Godzilla would be what it was, without humans. Offering Haruo soup which he accepts, Metphies quickly answers his own question, stating Godzilla is Godzilla because it is hated, and its existence is cursed, while Haruo's is essential because of it. Approaching the pot of soup, Haruo sees Miana submerged in the pot, and ends up awaking from what turns out to be a nightmare, only to be urged to actually confront Metphies as Maina expresses worry over her sister.

At Metphies' altar, he speaks to his followers about devotion, as does Endurph to his on the Aratrum. Both deem it impossible to defeat Godzilla by humanity's hand alone, and Adam insists "god" can defeat Godzilla. A chant then begins at both sites in a successful effort to summon Ghidorah, who begins to manifest as a shadow within Metphies' altar. The shadow proceeds to kill all of his followers, including Adam, and Ghidorah finally begins to appear above Earth's atmosphere, and the Aratrum in the form of a singularity. With the Bilusaludo having cut off the ship's power, and Ghidorah's immense power of gravity taking its toll on the ship, the crew is powerless as Ghidorah dismantles and destroys the vessel, killing everyone aboard in a nuclear explosion that lights up the Earth's atmosphere in a dazzling display.

On Earth, Godzilla fully awakens, and begins to move, just as Ghidorah begins to enter the Earth's atmosphere. Haruo, Martin, Maina and the remains of the fighting force on Earth, alongside the Houtua all reconvene, with Haruo leaving to go find Metphies. Ghidorah and Godzilla begin to fight, with Godzilla's attacks all being ineffective on what seems to be an ethereal creature which can't be detected by anything but one's eyes and ears. Nearby, Haruo finds Metphies, who has gouged out his right eye in favor of an Exif insignia-laced eye, which pushes Haruo into a trance-like, immobilized state.

In reality, Godzilla begins to radiate immense amounts of heat, identical to what occurred with Mechagodzilla City, only to have the heat stripped from its body and absorbed by Ghidorah, who begins to freeze the giant, only to then begin to raise him into the air. Back in the dream-like state, Metphies attempts to sway Haruo, beginning to guilt him about those who've fought and lost against Godzilla in his life, including Eliott Leland and Yuko. Martin and Maina make contact with Haruo through the egg, and Mothra briefly intervenes to break Metphies' grasp on Haruo. Metphies regains control and reveals that he was the one who put explosives on the elderly's shuttles, having made the elderly do it voluntarily. Haruo is then confronted by a hallucination of Daichi Tani, his grandpa, and swiftly snaps out of the illusion, having grabbed Metphies, before shattering his glass eye.

Ghidorah recoils for a brief moment, having been made physical, and Godzilla begins to attack, using a tail swipe to dispatch one head, ripping apart the second with its bare hands, and using a blast of atomic breath to finish the last one off as it escapes into the portal it appeared from, before it then destroys the rest of the portals. The next morning, Haruo awakens, and finds Metphies, who speaks on how Ghidorah will always watch over him, as long as he carries the hatred that he does. Haruo then grips his hand as Metphies dies from his injuries.

Following the battle, it is shown that the remaining humans on the planet abandon the ways of technology, scrapping their weapons and suits, and adapting to the lifestyle of the Houtua, while Maina becomes pregnant. Miana later shows Haruo the blossoming flowers of spring, marking the first time Haruo had seen it.

Martin then calls for Haruo, and shows him the reactivated Vulture. Upon the realization that humanity could once again use this technology to get to where they once were, Haruo has a vision, where Metphies states that expansion like this is human nature, but will lead to another time of harvest, implying returning to that state will spawn another Godzilla, or Ghidorah.

Later, Haruo is shown picking up Yuko's body, about to leave, before Miana stops him. Haruo asks if Miana hates Godzilla, to which she states the Houtua have no such word. When Haruo attempts to go once more, Miana states he's only losing if he does, which he accepts, saying sometimes one can choose a losing battle. While Miana doesn't understand, Haruo says that in time, if he stayed around, they would understand, but this is why he must leave.

Haruo then takes the final Vulture, and setting Yuko aside him, flies to Godzilla. Stating that he is the last of those who challenged or hated Godzilla, and that he bears the lives of all those he took on his shoulders as a result. He rhetorically challenges Godzilla to destroy the remnants of the past, leaving no traces, to which Godzilla fires a blast of atomic breath at his Vulture, destroying it, killing him, and Yuko.

In a post-credits sequence, the Houtua and their children are seen praying to a wooden statue they dub "their wrathful lord".

The first news of the sequel's announcement came on March 25, 2017, where it was announced that the then upcoming Godzilla: Planet of the Monsters would be the first in a planned trilogy of films.[2]

On April 18, 2018, it was confirmed in a humorous tweet by director Hiroyuki Seshita that development on chapter 3 of the Godzilla anime trilogy was underway, alongside City on the Edge of Battle.[3]

On May 18, the day of City on the Edge of Battle's theatrical release for Japan, promotional images for the film began to leak out. The promo material teased the Toho reboot series' incarnation of King Ghidorah, and the flyer also showed a golden, electricity laced Exif insignia on the back of it.[4]

A loosely translated tagline was unveiled, being "Bow down to the golden end." The film's title has many loose translations, ranging from Godzilla: Planet Eater, to Godzilla: Eater of Stars.[1]

The film's official poster was unveiled on May 28, 2018, along with a website update featuring a teaser.

On July 30, 2018, the film's teaser was unveiled, revealing the film's title, which is Godzilla: The Planet Eater, while also teasing Ghidorah further through a roar. 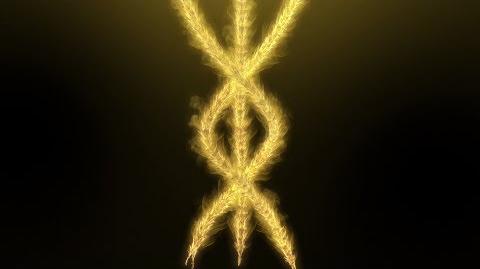 On September 14, 2018, a website update and Twitter post revealed the film's new poster, showing Godzilla Earth fighting Ghidorah, with an unconscious Haruo Sakaki being held by Metphies. The film's theme was unveiled, which is called "Live and Die".

On the 26th, a new novelization dubbed Godzilla: Monster Planet was unveiled, bringing the total novel count to three.

On October 10, 2018, a full trailer was revealed. The trailer contained a lot of new reveals, including the Aratrum under siege by Ghidorah, Metphies growing a following, and Haruo's growing relationship with one of the Houtua twins. 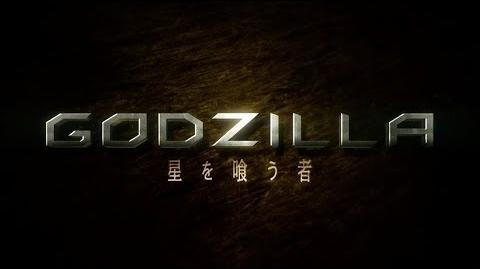 On November 7, a second novel was announced, being named Godzilla: The Planet Eater. It is an adaptation of the film.