Godzilla vs. AstroGodzilla
Godzilla (ゴジラ,   Gojira?) also known as Godzilla vs. The Gryphon is an unmade 1994 American Godzilla film.

In 1992, Toho sold the rights to Produce an American Godzilla film to Sony Pictures Entertainment, who assigned the project to its newly-acquired subsidiary, TriStar Pictures. Terry Rossio and Ted Eliott were brought in to write a script for the film, which was completed in 1994.[1][2] TriStar was satisfied enough with the screenplay to begin searching for directors. The screenplay caught the attention of director Jan De Bont after he had just finished directing the hit film Speed. De Bont originally wanted a budget of $100-$120 million for the film, but Sony and TriStar's executives were unwilling to place that much money into the project, eventually forcing De Bont to leave the project and sending Godzilla into development hell. Various writers were brought in to perform rewrites to try and reduce the projected budget, but the difficulties scared away several potential directors.

Eventually, TriStar approached the Independence Day team of Roland Emmerich and Dean Devlin, who had previously declined the project when it was pitched to them years before. This time however, Emmerich and Devlin accepted the project on the condition they could discard the original script and handle the film however they wanted. They were complimentary of the original draft, and said it showed them that a film could be made, but concluded "It wasn't a story we wanted to tell." They kept some elements from the original script, but changed most. Emmerich and Devlin brought in designer Patrick Tatopoulos to redesign the titular character as a more fast and agile creature based more heavily on dinosaurs. When the film and its new version of Godzilla were pitched to Toho, they were initially surprised but ultimately approved it when they contacted Emmerich and said "Okay, you make [the] new Godzilla; we keep [the] old one."[3] Emmerich and Devlin's Godzilla was eventually released in theaters in May of 1998.[1] Eliott and Rossio were given story credits in the finished film, as Emmerich and Devlin insisted they never would have been able to make the film without their original script. De Bont was vocally critical of the finished film, blaming Sony for allowing the production to fall so far off course from what he felt Godzilla was all about. Terry Rossio later wrote an essay titled "The One Hundred Million Dollar Mistake," in which he argued that the studio's decision to replace the screenplay he and Ted Eliott worked on with Devlin and Emmerich's completely different vision ultimately doomed the production to fail and potentially cost the studio $100,000,000 in box office revenue it could have otherwise earned.

Concept art for the American Godzilla and the Gryphon was commissioned by Ricardo Delgado in August and September of 1994. Stan Winston Studios was contracted to create the special effects for the film, even producing various maquettes and props for the unmade film. Additionally, a teaser trailer for the 1994 film was released in Japan.

This is a summary of the film. Read the full screenplay here.

Somewhere in the icy waters off Alaska, a salvaged ship is retrieving reactor cores dumped there by the Soviet Union during the Cold War. Something goes wrong and a mammoth explosion destroys the ship. On shore, the snow catches fire and a crevice opens up, oozing out steaming piles of what appears to be blood. A U.S. government scientist called Keith Llwellyn is flown to the site to investigate the incident, leaving behind his wife Jill Llewellyn and daughter Tina Llewellyn behind.

Soldiers carry off entire barrels of the 'blood', which upon examination resembles nothing more than amniotic fluid. Upon arriving, Keith and a few other scientists discover Godzilla in the caverns, where the 'blood' was oozing off from. The monster awakens and unintentionally kills Llwellyn and the rest of the investigation team. Godzilla then attacks the Japanese Kurila islands. A surviving fisherman calls the monster "Godzilla", after recognizing him from an ancient Japanese legend.

Twelve years later, cryptozoologists Aaron Vaught, a best-selling author and his assistant Marty Kenoshita, sneak into a mental hospital in Japan to interview the fisherman, and the fisherman shows them pictures he drew of Godzilla locked in battle with another monster. The military police then arrive and apprehend Vaught and Kenoshita.

Somewhere in Kentucky, a meteor crashes into lake 'Apopka'. In Massachusetts, the U.S. military has established the St. George project, a top-secret project to find Godzilla. Jill Llewellyn is the project's director. Vought is brought on board to help find Godzilla, despite that Jill doesn't approve of the idea. Meanwhile, back in Alaska, another military base was constructed where Godzilla was first found. Then, a strange light was seen illuminating from a previously undiscovered cave, branching off from Godzilla's cells.

In lake Apopka, the strange bio-metallic meteor begins to stir, flowing through the sediment like a mass of liquid metal. The probe enters a cave and absorbs a whole colony of bats, creating 12-foot wingspan creatures called probe bats. Vaught, Llewellyn and Kenoshita fly to the facility in Alaska where the amniotic fluid has begun to flow again in the cavern. Vaught then insisted this was the proper time for Godzilla to be reawakened, but the salvaged ship disrupted things and released them early. The side cave is lined with strange organic structures, remnants of an ancient society with advanced bio-technology. No one sees a small creature strike Marty Kenoshita and bury into his neck, even Kenoshita doesn't feel the creature burrowing into his neck. Events progress in Kentucky, as strange events occur.

In the Pacific, Godzilla is reported swimming towards San Francisco, where the St. George project is established at the procedure. Llewellyn and Vought soon arrive but Kenoshita becomes ill and is rushed to a hospital. The navy is the dispatched to counter Godzilla. After a crushing defeat, the military considers using a small nuclear device to destroy the monster, but Vought advises against it. He feels that Godzilla is a living nuclear reactor, and that what the monster breathes is not fire but something that ionizes oxygen so great it turns it into heat. Llewellyn further postulates that the amniotic fluid was not food as previously supposed, but a tranquilizer to keep Godzilla asleep. The fluid is hastily spread at the mouth of San Francisco Bay. Godzilla swims right into the oily liquid and collapses on the southern extremity of the Golden Gate Bridge.

The military secures the unconscious Godzilla and airlifts him back to the St. George project in Massachusetts, where he is housed in a huge hangar. Tina realizes that her mother has been trying to hunt and kill Godzilla for the past twelve years. She protested that the monster is just a force of nature, not responsible for the damage he causes. Not wishing to listen to this point of view, Jill sends her daughter to stay with her aunt in New York. At an army hospital, the strange infection Kenoshita has grows worse, consuming his internal organs and leaving his face lifeless and with eyes pitch black. Before he dies, Kenoshita tells Llewellyn that he has been taken over by an ancient force. The force has told him of his history and the threat that has come to Earth: an alien civilization that deploys probes to aid its colonization of the universe. These probes consume the native life of the target world and create a doomsday beast from the genetic material. By the time the aliens arrive, the probe would have wiped out all the life on Earth. An ancient Earth civilization warded off these probes by crafting Godzilla from the dinosaur genes. Godzilla would awaken when the probes arrived and destroyed them before they could reproduce.

In Kentucky, the probe bats continue to absorb animals, returning to the cave with their genetic collections to deliver to the main mass of the probe, which is slowly starting to take on a definitive form. Vaught, upon hearing Kinoshita's story, concludes that Godzilla was headed for Kentucky, where the meteor crashed. Local store keeper Nelson Fleer drives Vought to the lake. The two men don scuba gear and dive into the water. They discover a tunnel leading upwards from the bottom of the lake that leads them into a series of caves. Vought is terrified when he sees a giant paw. The paw is attached to the newly formed shape the probe has assumed. The monster has the body of a puma, the huge wings of a bat and a hydra-headed tongue composed of snakes. The probe has become the Gryphon, of the Japanese fisherman's drawings. Fleer accidentally bangs his air tank against the cave wall. The sound then awakens the dormant Gryphon, and the men hastily retreat but the monster pursues them. As they surface, they seems safe. Suddenly the water churns and the Gryphon emerges into the air. The Gryphon flies away and heads to Harrisburg, Virginia.

The monster destroys a train and a blast fuel storage tank with energy bullets, killing hundreds of people in the process. Despite the dip of amniotic fluid being given to him, Godzilla awakens, destroying the hangar and slipping into the Atlantic. It is clear that he has sensed the Gryphon's awakening. It is later determined that the two monsters will run into each other in New York. Jill tries to make her way into the city to save Tina in the midst of the evacuation. She is trapped in the Queens Midtown Tunnel when Godzilla steps on it, but manages to swim to safety. Jill finds her daughter as the Gryphon arrives and engages Godzilla in battle. The Gryphon attacks Godzilla from the sky, forcing the dinosaur back to the shore. Godzilla loses at first because a tank filled with the amniotic fluid is still attached to his neck, but Fleer and Vought manage to destroy the tank and Godzilla begins taking the upper hand against the Gryphon. Victorious, Godzilla roars and returns to the sea. Air force jets begin to attack the monster, but Jill Llewellyn calls them off and finally comes to terms with Keith's death and forgives Godzilla. Jill, Tina, Vought and Fleer watch from the shore as Godzilla disappears into the ocean.

A graphic novel adaptation of the film, illustrated by Todd Tennant with assistance from Elden Ardiente, was released online for free Thanksgiving 2018.[4]

Godzilla design by Ricardo Delgado; sometimes refered to as the "Delgadosaurus" 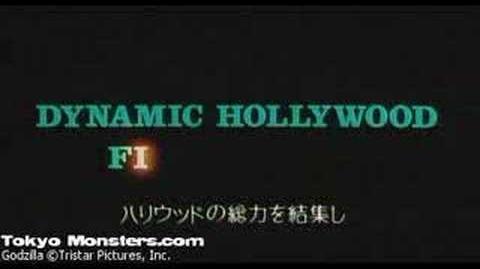 This is a list of references for Godzilla (1994 film). These citations are used to identify the reliable sources on which this article is based. These references appear inside articles in the form of superscript numbers, which look like this: [1]