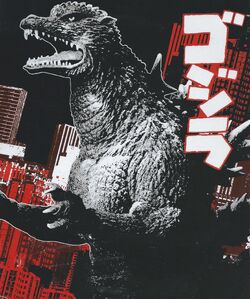 Godzilla is a series of action figures made by Bandai Creation.

It was first announced in 2002 that Bandai Creation was going to produce Godzilla toys to be retailed in the United States. Bandai Creation also produced toys for Legendary Pictures' Godzilla once it was released.

Bandai Creation's Pack of Destruction features 10 two and a half inch kaiju figures. The box has a wide display window where you can clearly view all the figures. The front right side top of the box features graphic artwork of Godzilla 2000 and the front bottom left displays one of the many Japanese castles that Godzilla has destroyed in his films. The back of the box features the ad for the Godzilla 6.5 inch figures. The left side of the box introduces the "Crumble Zone" play set, while the right side pictures artwork of Godzilla 84 and the caption reading:

"HE'S BACK BATTLING YOUR FAVORITE CREATURES FROM MOTHRA TO MECHAGODZILLA AND GIGAN TO KING GHIDORAH. HE'S BIG, HE'S GREEN, HE HAS OVER 98% UNIVERSAL AWARENESS! THIS MONSTER ICON HAS TERRORIZED HIS WAY INTO THE HEARTS OF MILLIONS SINCE 1954. WITH 26 MOVIE TITLES TO HIS CREDIT, TIME HAS SHOWN NOTHING CAN STOP GODZILLA".

The monsters featured here are:

While Bandai Creation's first wave of 6 inch figures and Pack of Destruction set found their way into popular outlet toy store chains, Bandai Creation's Crumble Zone could only be found in online auctions and in specialty stores usually marked double the suggested retail price. It wasn't till 2006, the Crumble Zone made its way onto the shelves of a couple of major retail stores. The Crumble Zone play-set consists of five kaiju figures, a diorama sheet & base, seven buildings, three vehicles, and a plane. The box has a wide display window where you can clearly view all the figures and accessories. The front top right side of the box features graphic artwork of Godzilla 2000 and the front bottom left displays one of the many Japanese castles that Godzilla has destroyed in his films. The back of the box pictures the full layout for the Crumble Zone and the same caption found on the "Pack of Destruction" play-set. The left side of the box pictures the Godzilla 6.5 inch figures. The right side of the box introduces the "Pack of Destruction" play-set.

The monsters featured here are:

The first wave of Bandai Creation figures consists of Godzilla 1954, Burning Godzilla, Gigan, and Rainbow Mothra. The figures are packaged on a display box with the figures secured by tie wrap. The front of the display box pictures graphic artwork of Godzilla 2000 firing his ray. The back features the line up of the 6.5 inch figures.

Collectors were surprised and shocked to find a second wave of new Bandai Creation Godzilla figures stocked on the shelves of outlet toy stores that originally sold the first wave of Bandai Creation figures and Pack of Destruction. No advance word was given that these new figures were produced and no samples were ever shown that Bandai Creation considered these new monsters would be added to the line. A move that left collectors puzzled by Bandai Creation's methods and speculated the new wave of figures was limited stock that would go away after its initial release. This wave's figures consist of Godzilla 2001, King Ghidorah 2001, SpaceGodzilla and the Heisei Mechagodzilla.

Bandai Creation continued its 6.5 inch Godzilla Series by releasing its third wave of figures in 2006. The new set of figures are tied in to the latest Toho film Godzilla: Final Wars. Bandai Creation updated their packaging using an actual picture of the Godzilla 2004 suit with a blue background with images of the original King Ghidorah and Gigan. The back of the packaging displays the new figures, yet no mention of Godzilla's 50th Anniversary. Bandai Creation also did not give advance word that the third wave was even being produced with many collectors finding the new figures on the shelves of the Toy Outlet Store that has continued to sell the Bandai Creation Godzilla Series from the beginning. This wave's figures consist of Final Wars Godzilla, Gigan, Anguirus, and Rodan.

With no new Godzilla films and the collector market itself taking a downward slide, Bandai Creation continued its line of Godzilla 6.5' sized figures, producing four newly sculpt figures based on toys previously released by Bandai Japan. Bandai Creation continues to use the same style packaging used previously, yet for the Wave Four series, the color of the packaging is changed to grey and black with new pictures of King Ghidorah and Gigan 1972 in the background. Rodan's wing is also captured in the background with Ghidorah. The actual picture of the Godzilla 2004 suit is still displayed on the front. The back of the packaging announces and displays the new Wave Four figures. 2007's lineup features: Godzilla Millennium, Destoroyah, Godzilla 1968, & Hedorah. The packaging also announces Bandai Creation's first set of 12' sized figures: Mechagodzilla 2002 and Godzilla 2004.

Speculation for a sixth wave began shortly after the release of the fifth wave, especially due to note of a poll on Bandai Creation's site during 2010 asking for the favorite monster of visitors, the options including: Godzilla, Minilla, Monster X, King Ghidorah, Mothra and Heisei Mechagodzilla. Back then, it was unknown if a sixth wave was actually in production, when it would be released or what exact monsters it would include. Bandai Creation soon released the speculated wave 6 that came with a black, red, and white box with the same picture of Godzilla 2004 and the Godzilla Final Wars logo. But wave 6 didn't come with new monsters, instead they were re-issues of three of their older figures: Godzilla 2004, Godzilla 1954, and Rainbow Mothra.

Bandai released a seventh wave in late 2011. Similar box design as the sixth wave, and just like the sixth wave, this series did not include any new figures. It included GMK Godzilla, Final Wars Gigan, and SpaceGodzilla.

Released in early 2012, this wave was just like the others. Same box design, all re-issues, but this wave was accompanied by Fusion Series and Tokyo Vinyl kaiju. The monsters released in this wave were Godzilla 1968, Showa Gigan and the original Mechagodzilla.

There was an unreleased Little Godzilla figure that would have been part of this wave.[2]

In mid-to-late 2013, Bandai Creation made a ninth wave that included a reissue of Burning Godzilla, Mechagodzilla 1974 (now called "Mechagodzilla The First"), Gigan, Rainbow Mothra, Godzilla 1968, a 12" Godzilla 2004 and a 12" Kiryu, as well as a Showa King Caesar figure, the first new figure that has been released since wave 5. It has the same box design as the recent waves. The wave also came accompanied by a new "Chibi Figures" collection, which included Godzilla, Mothra, King Ghidorah, Gigan, the Heisei Mechagodzilla and Destoroyah.

In the beginning of 2014, Bandai Creation made a tenth wave that included a reissue of Godzilla 1954, Millennium Godzilla, Showa King Caesar, the 12" Godzilla 2004, the 12" Kiryu, and the mini figures. It featured a new box design celebrating Godzilla's 60th anniversary (1954-2014). 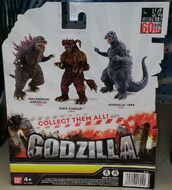 By the end of 2014, the eleventh wave, which features Godzilla 1954 and King Ghidorah, both re-issues, was released, alongside a regular 6-inch Godzilla 2014.

The line was originally planned to introduce Bandai Japan Godzilla Eggs, rebranded as "Hatch-n-Heroes," though this never came to be.

Bandai Creation's Godzilla Fusion Series is a toy line introduced in early 2012, along with Wave Eight and Tokyo Vinyl. These are told apart from the regular series because the kaiju are sculpted with translucent and glittery vinyl that is not necessarily the monster's film coloration, and has a gold and black sticker next to the title "Godzilla" saying "FUSION SERIES". The vinyl is also very soft, unlike almost every (if not all) Bandai Creation Kaiju figures. To date, the Fusion Series figures are Godzilla 1968, Burning Godzilla, Millennium Godzilla, Showa Gigan, Rainbow Mothra 1998 and Mechagodzilla 1974.

There is an unreleased "Meltdown Godzilla" figure that was intended to be part of this series.[3]

Bandai Creation's Tokyo Vinyl is a toy line introduced in early 2012, along with the Fusion Series and wave 8. The kaiju in this toy line can be easily told apart from the regular series and the Fusion Series because the monsters look like chibis. To date, the Tokyo Vinyl line has only two figures: FW Godzilla and the original Mechagodzilla.

There are 3 unreleased Tokyo Vinyl figures.[4][5]

A number of six-inch figures that were originally part of the Bandai Creation line were released in Japan by Bandai Japan under the name "Movie Monster EX." Slight to no changes were made to the molds and paint jobs. Bandai Japan later re-released Bandai Creation's 12-inch Godzilla 2004 and Kiryu figures under the name King of the Monsters Series.

In an interview with Toho Kingdom, a spokesperson for Bandai Creation confirmed that they would be producing and releasing figures in the United States for the then upcoming Japanese film Shin Godzilla in 2016.[6] After 2016 ended, so far no progress has been made.

In the same interview, the Bandai Creation spokesperson confirmed that Bandai Creation would be producing figures for Godzilla: King of the Monsters in 2019, and that they planned to release figures for the versions of Rodan, Mothra and King Ghidorah from the film.[6]

Bandai has a number of unreleased figures from their various Godzilla series that have been revealed to the public but have never been released. Here is a list of them:

Bootlegs of Classic Godzilla Bandai figures exist. At least the 12-inch figures of Godzilla 2004 and Kiryu have been bootlegged.

Bootlegs of the "Smash Strike" and "Tail Strike" Godzilla figures were made and distributed in China.[8] The bootlegs removed the "gimmicks" of the two figures, instead making them like regular Bandai Godzilla figures, had articulation in the arms and legs, and poor paint jobs.

The Novel Style Godzilla is a bootleg of Bandai Creation's Godzilla 2000 figure. The figure has been remolded and repainted to somewhat resemble Godzilla 2014 and supports batteries which light up a chest light and his dorsal plates.

This is a list of references for Godzilla (Bandai Creation Toy Line). These citations are used to identify the reliable sources on which this article is based. These references appear inside articles in the form of superscript numbers, which look like this: [1]