The Godzilla (ゴジラ,   Gojira?) of the Final Wars continuity was the fifth and final Godzilla within the Millennium series of films.

This Godzilla was the first and only within its continuity, much like the Megaguirus Godzilla.

Godzilla's name within the Millennium series follows the convention of that of the Showa era Godzilla, being a transliteration of Gojira (ゴジラ?), a combination of two Japanese words: gorira (ゴリラ?), meaning gorilla, and kujira (鯨 or クジラ?), meaning whale.

The skin tone of the monster is a grayish black color, following past design trends, with the dorsal plates of the monster being a traditional bone white.

The roar for the Millennium series was revamped and elongated in length.

This Godzilla features an animal-like personality, however, it also possesses some basic emotions. This includes the ability to forgive humanity, having been spurred on by Minilla's defense of the humans as he went in to destroy them.

Final Wars' Godzilla was awakened by nuclear testing in 1954, however, it wasn't killed by the Oxygen Destroyer, and merely trapped under the Antarctic ice sheet for decades, before rising again.

In 1954, nuclear testing awakened the monster Godzilla, the most powerful enemy mankind ever faced. The international military organization known as the Earth Defense Force (EDF) was formed to combat Godzilla and other giant monsters that appeared over the next decade, but it could never defeat Godzilla. Sometime in the 1960's, the EDF lured Godzilla to Antarctica for a final showdown. Godzilla easily defeated the EDF's Maser Cannons it had stationed there, but found himself under attack by the advanced warship the Gotengo. Godzilla shot down the Gotengo with his atomic breath, but before he could finish it he fell into a crack in the ice. Young Gotengo crewmember Douglas Gordon fired a missile at a nearby slope, causing Godzilla to be buried under tons of ice. The facility known as Area G was constructed around Godzilla's icy prison, and the monster remained trapped for decades to come.

In the year 20XX, an alien force known as the Xiliens had invaded Earth and taken control of all of the planet's monsters, using them to destroy major cities around the globe. The Gotengo, piloted by Gordon and staffed with all of the EDF's remaining forces, flew to Area G and used its missiles to free Godzilla, believing him the only force capable of defeating the Xiliens' monster army. Godzilla emerged from his icy prison, and was immediately attacked by the Xiliens' cyborg monster Gigan. Gigan wrapped Godzilla in barbed wire, but Godzilla blasted the monster's head off with his atomic breath. Believing his battle with the Gotengo from decades ago was still going on, Godzilla chased the ship to Australia. In Sydney, Godzilla found himself attacked by the monster Zilla, which lunged at him. Godzilla used his tail to smack Zilla into the Sydney Opera House, then finished his opponent with a blast of atomic breath.

Godzilla then traveled to New Guinea, where he fought Kumonga. Godzilla grabbed a thread of Kumonga's web and tossed the giant spider over the horizon before continuing on his way. After reaching the Kanto region of Japan, Godzilla encountered Kamacuras. Godzilla fired his atomic breath at the monster, which dodged the beam and flew at him. Godzilla simply grabbed Kamacuras and threw it at an electrical tower, which impaled and killed it. As Godzilla marched further inland he reached Mount Fuji, where the Xiliens deployed Anguirus, Rodan and King Caesar against him. Godzilla proved to be more than a match for the three opponents, and defeated them one-by-one, stacking their unconscious bodies on top of each other. Godzilla reached Tokyo Bay, where he was attacked by Hedorah and Ebirah. Godzilla tossed both monsters out of the bay with his atomic breath, causing Ebirah's claw to impale Hedorah's eye. With both monster immobilized, Godzilla fired his atomic breath at them and destroyed them both.

After finally reaching Tokyo, Godzilla saw the asteroid Gorath hurdling toward the city. Godzilla planted his feet and fired his atomic breath at Gorath, causing the asteroid to explode in the skies over Tokyo, reducing the city to a crater. As Godzilla stood in the ruins of Tokyo, Monster X levitated to the ground behind him. Godzilla attacked this new monster, but found it was more than a match for him, fighting with incredible speed and ferocity. Mothra flew to Tokyo to assist Godzilla, but was intercepted by the repaired and modified Gigan. Gigan sliced Mothra's wing with his chainsaw hand, then began to help Monster X fight Godzilla. Monster X held Godzilla from behind while Gigan sliced his chest with his chainsaws. Godzilla moved out of the way and caused Gigan to strike Monster X instead, causing him to release him. Mothra then flew by and knocked both Monster X and Gigan to the ground. Gigan pursued Mothra again, but was killed when his razor discs accidentally sliced his head off and Mothra flew into him and exploded. Godzilla and Monster X resumed their one-on-one battle, with Godzilla finally gaining the upper hand. Godzilla pinned Monster X to the ground and pummeled him mercilessly. When the Xilien Mothership self-destructed, Godzilla and Monster X fired their beams at each other, which locked in the air. The beams exploded, knocking the monsters to opposite sides of the city.

Suddenly, Monster X transformed into Keizer Ghidorah, which was much larger and more powerful than Godzilla. Godzilla fired his atomic breath at Keizer Ghidorah, but the creature's gravity beams overpowered Godzilla's beam. Keizer Ghidorah used its telekinetic gravity beams to toss Godzilla across the ruined cityscape, then began to kick the fallen Godzilla in the head repeatedly. Finally, Keizer Ghidorah grabbed Godzilla with hits mouths and began draining his energy. When the Gotengo flew past the monsters, its crewmembers realized they needed to help Godzilla. Shinichi Ozaki used the ship's Maser Cannon to fire his Keizer energy into Godzilla's dorsal plates, reinvigorating him. Godzilla released a shockwave that forced Keizer Ghidorah to release him, then destroyed the beast's middle head with his atomic breath. When another head tried to fire a gravity beam at Godzilla, Godzilla pulled the other head in front of the beam, severing it. Godzilla grabbed the maimed Keizer Ghidorah by its remaining head and slammed it up and down before throwing the monster into the air. Godzilla fired his spiral red heat beam at Keizer Ghidorah, pushing it into outer space, where it exploded.

As the Keizer energy wore off, Godzilla shot down the Gotengo with his atomic breath. As the ship's crew exited and aimed their weapons at Godzilla, Minilla suddenly ran into the city. Minilla stood in front of Godzilla, holding out his arms and blocking him from attacking the humans. Godzilla finally forgave humanity and turned around and walked out to the sea. Minilla followed after Godzilla, but not before firing a blast of atomic breath into the air. As Godzilla and Minilla waded out into the sunset, Godzilla turned and roared out one last time. 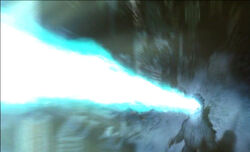 Godzilla's atomic breath was utilized once more during the events of Final Wars, however, it received a large boost in power. During Godzilla's battle against Keizer Ghidorah, Godzilla once again showed the ability to change the intensity of his atomic breath at will. With a quick turn, Godzilla's breath went from the iconic blue beam to the red spiral heat ray, which literally caused the monster Keizer Ghidorah to explode in the upper atmosphere.

Godzilla was able to absorb Shinichi Ozaki's Keizer energy, empowering him and allowing him to easily defeat Keizer Ghidorah.

Godzilla displays immense physical strength in this film, having been able to throw Kumonga clear over the visible horizon through sheer strength alone.

The red spiral ray returned in Godzilla: Final Wars, where it was strong enough to push Keizer Ghidorah to the edge of space, destroying him in an explosion visible from the surface of the Earth.

During the events of the film, Godzilla was sealed under ice in Antarctica for several decades. While this didn't physically harm him, it incapacitated him.

Much like most Millennium Godzilla incarnations, this Godzilla wasn't playable within the game, but was briefly mentioned in the Kaiju Guide.

This incarnation of Godzilla also made an appearance within the mobile title Godzilla: Kaiju Collection.

Godzilla 2004
Add an image to this gallery

Retrieved from "https://godzilla.fandom.com/wiki/Godzilla_(FW)?oldid=303030"
Community content is available under CC-BY-SA unless otherwise noted.