Godzilla (ゴジラ,   Gojira?) is a daikaiju created by Toho that appears in Godzilla the Ride: Giant Monsters Ultimate Battle.

This Godzilla's roar switches between the one from the Millennium era of films and the Heisei films. The roar can be heard in the trailer.

Godzilla displays somewhat of a benevolent nature as seen when he helps the passengers in the bus by picking them and allow them ride down his back, as well as him saving the same group from the living head of Ghidorah which allows them to escape, though this he could have done unintentionally. He also has a fierce hatred towards King Ghidorah which implies an aggressive and dominant personality. This is illustrated in his fight with King Ghidorah during the events of the ride, with Godzilla brutally crushing an intact head with his foot after defeating him.

Just before King Ghidorah could destroy any more of the city Saitama, Godzilla arrived. Godzilla tried to engage in battle, getting bit by the three-headed monster. Godzilla eventually grabbed Ghidorah's necks, threw him up and used his atomic breath, piercing Ghidorah's body. As Ghidorah's remaining head tried to eat the people on the bus, Godzilla stepped on the head, killing Ghidorah in the process. Godzilla gave a triumphant roar.

Godzilla's most iconic and powerful ability is his atomic breath. The blue beam is composed of pure radiation. While he only used this ability once, it was so powerful that one blast of it pierced threw Ghidorah's body.

Godzilla was shown to be incredibly strong, easily throwing Ghidorah by the neck. Godzilla's foot was also able to kill Ghidorah's living head after one stomp.

Godzilla was shown to be quite durable, survived getting bit and thrown by Ghidorah, who easily defeated Rodan previously. 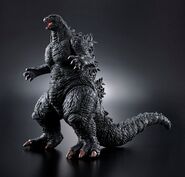