Godzilla - International Trailer
The Godzilla Asia Trailer was the fourth and final trailer for Legendary Pictures' 2014 film Godzilla, and was uploaded to Youtube on April 28, 2014.

A large band of military vehicles, consisting of helicopters, jeeps and large trucks is seen approaching an unknown destination in a desert.

Joseph Brody: Whatever it is...

A group of military personnel open up a large vault.

Joseph Brody: That's in there...

A soldier clad in basic apparel with a gas mask looks up at something, his hand covered in an unknown slime. Ishiro Serizawa is seen looking forward in awe as a large gathering of people look up at a large, black, rocky mass.

Joseph Brody is then seen speaking.

Joseph Brody: Whatever it is they're guarding so carefully...

A quick cut reveals electricity covering the rocky mass, which glows and pulses, leaving alarmed workers backing off and running in fear.

Joseph Brody: God help us all.

A panning shot shows a destroyed city, with helicopters flying about, before Ford's seen once more.

Ford Brody: Can you kill it?

A MUTO's then seen appearing from the clouds, Elle Brody's shown backing away from something in fear, before the MUTO's then shown flying through the city, right by a skyscraper filled with people.

Ishiro Serizawa: I believe something can.

Godzilla's foot slams into the ground with a large thud, and he snarls briefly. Joe's seen looking up in shock, before it cuts back to Godzilla, showing his large hands and claws, finally cutting back to Ford.

Godzilla's seen, silhouetted by a large flash of lightning.

Godzilla's seen as he lets out a loud roar.

The damaged replica of the Statue of Liberty's seen, before cutting to firefighters walking out of a building, and then to tanks mobilizing on the Golden Gate Bridge.

A FORCE OF NATURE

The flooding of Hawaii is shown, with entire streets being flooded due to Godzilla's arrival.

Joseph Brody's seen looking up as the room he's in begins to black out, before the scene shifts to the HALO jump, military personnel opening fire on an unknown target, a missile hitting a suspension cable on the Golden Gate Bridge, and then to Vivienne, who steadies herself as the room she's in shakes. This culminates with an entirely new shot of Godzilla being struck by missiles and beginning to fall into the Golden Gate Bridge, the train being destroyed by a MUTO, a shot of Ford saving a young child from falling out of said train, a helicopter opening fire on a MUTO, before falling out of the sky and into a passenger airliner, destroyed. Joseph is then seen, yelling to someone as shots of the nuclear shockwave finish out the montage of events with a hard cut to black.

As the trailer fades back in, the HALO jump's progression is shown once more, Elle Brody's seen comforting her son, Sam Brody, and military fighters are seen falling from the sky while Ishiro Serizawa narrates the segment.

Ishiro Serizawa: The arrogance of man is thinking nature is in our control, and not the other way around.

A brief shot of Serizawa is then seen, as he speaks.

At night, a MUTO is seen flying overhead towards Godzilla, who lets out a deafening roar in response, before the trailer ends. 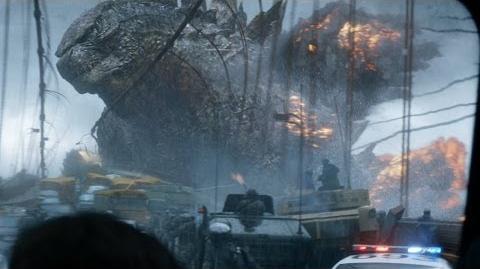