Godzilla - Asia Trailer
The Godzilla International Trailer was the third trailer for Legendary Pictures' 2014 film, Godzilla, and was uploaded to Youtube on March 18, 2014.

A destroyed city is shown, alongside a flooded roadway in Hawaii.

Joseph Brody: They're not fooling anybody that what happened is a natural disaster.

A crashed plane is shown on a gridlocked section of country.

Joseph Brody: It was not an earthquake. It wasn't a typhoon.

The aftermath of a confrontation in Hawaii is seen, with multiple buildings being either gutted or destroyed entirely.

A shot of Joseph himself is shown.

A large, dug out crevasse is shown, leading from an inland site to the ocean.

Joseph Brody: Whatever it is that they're guarding so carefully... I need to be able to prove that it's real.

Godzilla is shown rising underneath a fleet of naval ships.

A destroyed replica of the Statue of Liberty is seen, before shifting to Joseph in the Janjira reactor.

Ishiro Serizawa: The arrogance of man is thinking nature is in our control...

Sandra Brody is seen running through the Janjira nuclear reactor in a panic, which then cuts to a shot of firefighters looking out of a destroyed skyscraper complex, before cutting back to Janjira, with Joseph running against the tide of the people running out. This miniature montage concludes with two soldiers overlooking a lake of burning military vehicles, including tanks, fighters, and jeeps.

Serizawa is then shown speaking.

Ishiro Serizawa: And not the other way around.

People are shown looking to the skies as a nuclear device is airlifted overhead.

William Stenz: I know many of you have family and loved ones.

Cue a shot of Ford and Elle Brody laughing with each other, before cutting to Godzilla slowly walking behind a building.

William Stenz: And that you want to help them.

Schoolchildren are then seen running, while Stenz' men make the jump from the aircraft, and into the city.

William Stenz: Well, this is your chance.

A helicopter falls from the sky, into an airliner on the ground and explodes, before cutting to Joseph reeling in surprise from seismic activity in the reactor, and then to Ford, who's seen looking up, and then jumping and running off of the train tracks he's on. Godzilla's dorsal spines are seen rising, reflected on a school bus's windows, as military fighters rain from the sky, before promptly cutting to black.

Four soldiers launch flares into the sky, which reveals a slowly lumbering Godzilla.

Godzilla's roar then plays as a montage starts: first showing Godzilla silhouetted by lightning, a MUTO destroying a train, Joseph showing shock and sadness at Sandra's fate, Ford jumping off the tracks, Ford falling, wounded, a squad of soldiers running at night in a city, a giant support falling on the Golden Gate Bridge, a MUTO appearing from the clouds, Serizawa and Vivienne looking up in awe at something, before ending with Godzilla roaring towards civilians, ending on the same not as the Official Main Trailer. 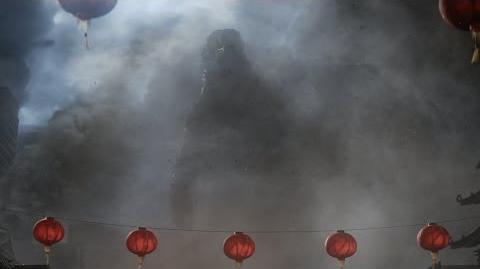 This is a list of references for Godzilla - International Trailer. These citations are used to identify the reliable sources on which this article is based. These references appear inside articles in the form of superscript numbers, which look like this: [1]