Godzilla - International Trailer
The Godzilla Official Main Trailer was the second trailer for Legendary Pictures' 2014 film, Godzilla, and was uploaded to Youtube on February 25, 2014.

Joseph Brody: I want to talk to somebody in charge.

A large gridlock of cars is seen, seemingly in the midst of an evacuation. The slow nature of the shot reveals a plane had crashed across multiple roads.

Joseph Brody: You are not fooling anybody when you say that what happened was a natural disaster.

A shot of a nuclear reactor collapsing as someone looks on is then shown.

Joseph Brody: You're lying. It was not an earthquake. It wasn't a typhoon.

Joseph is then seen running down a crowded hallway, seemingly telling people to run and clear out, before the shot crossfades into that of many military jeeps and helicopters heading to an unknown location in the desert.

Joseph Brody: Because what's really happening, is that you're hiding something out there.

A large panning shot of a destroyed city is then seen, including a destroyed replica of the Statue of Liberty.

Joseph Brody: And it is going to send us back to the Stone Age!

Godzilla's snarl is then heard as he swims underneath an aircraft carrier, with the people on deck watching as he rises, the wave he creates resulting in massive destruction across the island.

Joseph Brody: God help us all.

A group of military members are seen exploring the jungle, and make their way to a nuclear device, where one scrapes the slime off of the nuclear symbol present on it.

Ishiro Serizawa: In 1954, we awakened something.

Serizawa is seen looking at an old image of Godzilla rising from the ocean.

A large bomb is seen on a beach, with a crudely drawn Godzilla possessing a universal no symbol atop it.

Vivienne Graham: With those nuclear tests in the Pacific.

Godzilla rises from the ocean as the bomb detonates, creating a massive mushroom cloud.

Ishiro Serizawa: They were trying to kill it.

The shockwave from the blast engulfs the island.

A train is seen being seemingly attacked, before a shot of Joseph and Ford Brody is shown, with them observing something. This then cuts to a shot of Godzilla walking behind a building.

Joseph Brody: You have no idea what's coming.

A scene with Ford looking at the nuclear device, encrusted with orange, glowing, pulsating spheres is shown, before cutting to Serizawa.

Ford Brody: Can you kill it?

A MUTO is then seen appearing through the clouds, and seemingly diving into the ocean, while the HALO jump is then shown. A reappearing shot of Joseph plays, who's seen breaking down and covering his mouth as it's shown his wife Sandra is locked behind a closing bulkhead, this time, the bulkhead's shown closing entirely.

Serizawa is seen alongside other people in heavy duty suits, exploring a massive ribcage.

Ishiro Serizawa: The arrogance of man is thinking nature is in our control.

This crossfades to a shot with military fighter jets falling from the sky, as soldiers look on in seeming awe.

Ishiro Serizawa: And not the other way around.

A squad of four soldiers is seen launching flares high into the skies, before Godzilla slowly lumbers forward, his head not visible within the shot due to his vast size, illuminated by the light of the flares

Godzilla's roar then plays as a montage starts: first showing a MUTO's clawing hitting the ground with a red glow, onlookers seeing a nuclear device being airlifted above a city, Ford looking on in surprise as a MUTO rips the train he's on apart, Ford running across, and jumping off of a train track, a flaming helicopter spinning out of control, Elle Brody holding her son, before finally ending with a shot of Godzilla, giving off the roar towards civilians seemingly, as giant bulkhead doors close him off from view. 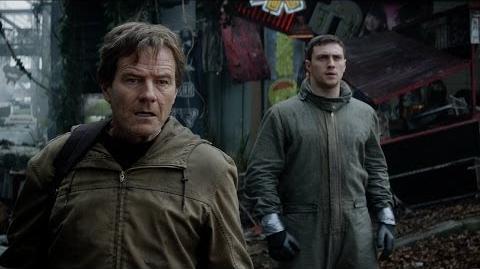 This is a list of references for Godzilla - Official Main Trailer. These citations are used to identify the reliable sources on which this article is based. These references appear inside articles in the form of superscript numbers, which look like this: [1]

Retrieved from "https://godzilla.fandom.com/wiki/Godzilla_-_Official_Main_Trailer?oldid=362635"
Community content is available under CC-BY-SA unless otherwise noted.