Godzilla - Official Main Trailer
The Godzilla Official Teaser Trailer was the initial trailer for Legendary Pictures' 2014 film, Godzilla, and was uploaded to Youtube on December 10, 2013.

William Stenz: Gentlemen, you're being sent in via HALO jump.

The shot shows the Admiral briefing a large group of men on the procedure.

William Stenz: I realize not all of you have had hands-on experience.

The scene shifts to that of soldiers preparing for the jump within the loading bay of a large aircraft as the rear door opens.

William Stenz: But frankly, none of us have faced a situation quite like this one before.

A buzzer rings, and the soldiers run forward, leaping from the craft as their flares begin to trail behind them, blazing a deep red.

William Stenz: But I would not be asking any one of you to take this leap if I did not have complete faith in your ability to succeed.

The group begins to assemble into the proper formation as they've all jumped.

William Stenz: Your courage will never be more needed than it is today.

The group breaches the first layer of clouds, revealing a massive, raging storm beneath, filled with lightning. They press on and breach the second layer, before seeing the burning and desolate San Francisco. The scene shifts to the first person perspective of Ford Brody, who looks over to his squadmates, before gazing over to see Godzilla, slowly walking forth through the destroyed city, illuminated by bright flashes of lightning which give off a distinctive shadow.

The scene then shifts to an initially silent montage. First showing Joseph Brody running through the Janjira nuclear reactor, attempting to warn people to get out. The next is a shot of a squad of military personnel walking towards an unseen goal, with a train behind them. Ford is then seen lowering his weapon with an expression of shock on his face. In a brief shot following, a MUTO is shown completely tearing the front of a train off with its mouth, causing civilians to fall out.

This is then cut off by a shot of Elle, hugging her son in a comforting manner. A group of soldiers are then seen cautiously opening a vault which casts a bright light on the primarily green tinted environment.

Ishiro Serizawa is seen looking into a bright cave exit as a musical track suddenly kicks in, cutting to a shot of a large explosion in an airport. Ford jumping off of a train track as it's destroyed. Vivienne Graham steadying herself as the room she's in shakes. A nuclear device being handled by military personnel on a boat. School children run as the then unseen reactor collapses. Sandra Brody is then seen trying to help someone's who's fallen, before the scene then cuts to Joe who's seen breaking down and covering his mouth as it's shown Sandra is locked behind a closing bulkhead. The train from the 2012 teaser's seen, having been flattened. Ford slowly turns around as he looks towards the then unseen MUTO. The nearly bisected skyscraper from the 2012 teaser also makes another appearance, with the final shot being that of a shocked Elle backing away from an unseen threat.

In a sequence identical to the 2012 teaser, Godzilla is seen, obscured by a large amount of dust. He slowly turns to face to viewer, debris raining down his body as he then lets out a loud, and updated roar. 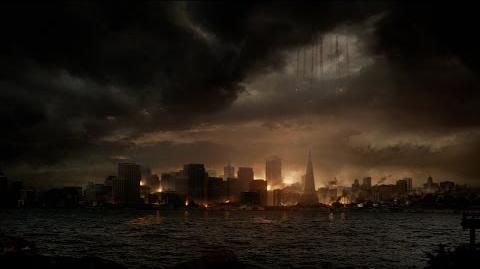