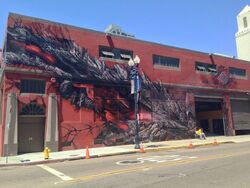 The Godzilla Encounter is an exhibit located in San Diego, California, which first opened in July 2013, at a near date to San Diego Comic-Con 2013.

One of the attractions of this exhibit is a "ride" where you could go up on an elevator in a building, and you would see Godzilla outside in a dark rainy weather, walking by two times. The first is several meters away, and the second pass-by has Godzilla looking right inside through the windows.

An app for the Godzilla Encounter exhibit was developed by Legendary Pictures for the iTunes app store. The app is meant to be used when visiting the exhibit.

It had the following features: