Godzilla Generations (ゴジラ・ジェネレーションズ,   Gojira Jenerēshonzu?) is a game for Dreamcast developed by General Entertainment and released on November 28, 1998.

There are five areas with eleven subsections in the game. They are:

The military is present in this game like all others. Although here it appears under the name "Self Defense Force." There are eleven vehicles used.

Godzilla Generations received extremely negative reviews, at least in the west. IGN's review, which was one of the first Dreamcast game reviews by a western source, slammed it for being tedious and simple. The graphics were also harshly criticized. GameSpot gave the game a 3.2/10, saying that the inability to block and the fact all the kaiju could heal made the game boring.[1]

Fans have generally been much kinder to the game, since it's one of the few that has Minilla and Zilla as playable characters, and also one of the few games that allows free-roaming destruction.

A Virtual Memory Unit (VMU) compatible with the game, required to play the Coliseum mode

From the manual, chibi monsters that can be used in the Coliseum mode 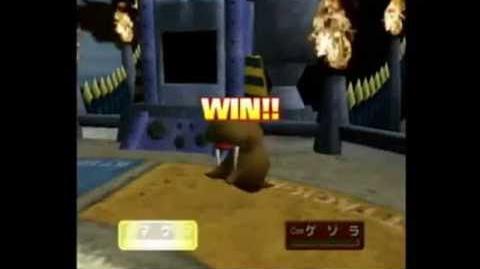