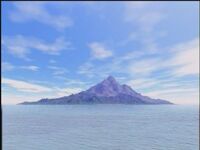 Godzilla Island (ゴジラアイランド, Gojira Airando) is an island in the South pacific where most of Earth's monsters live. It was the setting on the 1997-1998 television series of the same name.

Although the story of how Godzilla Island came to be is not known, what is known is that, by the year 2097, the tropical paradise is home to most of the planet's monsters. The job of monitoring the monsters and protecting them falls to the G-Guard Commander, who all but lives on the island with only the company of the robot Lucas. However, an alien race known as the Xiliens arives on Earth intending to conquer the planet, starting with Godzilla Island! It is up to the Commander, Lucas, the alien Torema, the Commander's daughter Misato, her friend Nao, and all the monsters living on the island to protect their home from the Xiliens and their horde of evil space monsters.

Retrieved from "https://godzilla.fandom.com/wiki/Godzilla_Island_(Location)?oldid=195902"
Community content is available under CC-BY-SA unless otherwise noted.