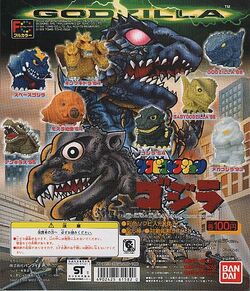 Godzilla Sofubi Collection is a line of sixteen 1-inch super-deformed vinyl figures made by Bandai released only in Japan in mid-through-late 1998. The first set was released around the time the American Godzilla film was released in Japan, and the second set was released in conjuction with Rebirth of Mothra III. Each figure cost 100 yen and came in capsules.

SpaceGodzilla
Add a photo to this gallery

King Ghidorah '98
Add a photo to this gallery

Retrieved from "https://godzilla.fandom.com/wiki/Godzilla_Sofubi_Collection?oldid=400734"
Community content is available under CC-BY-SA unless otherwise noted.