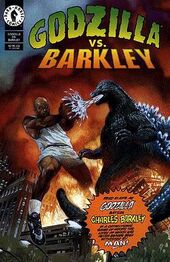 Godzilla vs. Charles Barkley is a 1992 Nike television commercial in which a giant-sized version of NBA star Charles Barkley challenges Godzilla to a game of basketball in the streets of downtown Tokyo. The commercial was later adapted into a comic book by Dark Horse Comics.

At the beginning of the commercial, Godzilla is rampaging through Tokyo when he hears Barkley dribbling a basketball. In response, the monster dons a pair of pink goggles and prepares for a basketball game, in which the two will use the O from a Tokyo sign as their hoop. Godzilla knocks the ball from Barkley's hands with his tail, but Barkley retrieves it and pushes Godzilla into a building, clearing the path for an easy slam dunk. Afterwards, Barkley and Godzilla are seen walking through the streets together, with Barkley's arm on Godzilla's shoulder. Barkley tells Godzilla that "the Lakers are looking for a big man", and the spot concludes with the Nike swoosh logo.

Making of the Commercial

Godzilla vs. Charles Barkley was conceived by advertising agency Wieden & Kennedy and produced by Industrial Light & Magic. It was originally intended for Japanese audiences, but Nike was impressed enough to use it in the United States, where it debuted on September 9, 1992 during the MTV Video Music Awards broadcast on MTV.

The commercial required eight days of filming during the first two weeks in June 1992 and four weeks of editing thereafter. It employs suitmation techniques, which were still being used in the Godzilla films being made by Toho. Clint Goodman of ILM explained, "The idea was that we would show a modern look, but not with total 'ILM realism'. It just wouldn't be true to the subject matter." The Godzilla costume comprised many foam rubber pieces, and puppeteers produced the monster's facial expressions with radio control devices. Some of the building props in the commercial were originally used in the 1984 film Ghostbusters. The special effects team used mattes to create the illusion of a larger city.

The Barkley Godzilla (バークリーゴジ,   BākurīGoji?) is the Godzilla used in the 1992 Godzilla vs. Charles Barkley Nike commercial.

The BarkleyGoji is strongly similar to the Heisei suits, mostly BioGoji and BatoGoji. However, it features large, cartoon-esque eyes which allow for a wide range of expressions.

In December 1993, Dark Horse Comics released a one-shot comic inspired by the commercial (although most of the action takes place in California, rather than Japan). The comic was written by Mike Barron with art by Jeff Butler and Keith Aiken.

Years later, it was reviewed by Lewis Lovhaug a.k.a. Linkara in one of his earliest episodes of Atop the Fourth Wall. 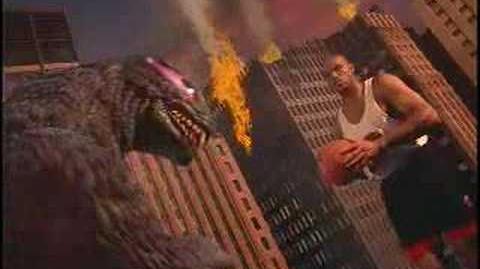