The film was directed and produced by Shizuo Nakajima and several former filmmakers of Toho in 1983. Toho said they had nothing to do with or even approved of this film, and because of this the film remained unreleased and "lost" for over thirty years.

In recent years, director Shizuo Nakajima has made efforts to publicize the film to fans and push for an official DVD release. Nakajima discussed the film at G-Fest XX, and has revealed several pieces of footage in subsequent events. By 2016, Nakaijima announced that he had been working to splice together the footage for the film and hoped to give the film a DVD release soon. Nakajima shared an image on his Facebook page that said the film would be coming to DVD in summer 2016.

From what has been revealed, the plot of Godzilla vs. Wolfman consists of a werewolf appearing in Japan, which becomes irradiated and grows to daikaiju size. This giant Wolfman encounters Godzilla in the countryside, and the two monsters battle. Godzilla is portrayed as a rampaging monster like in the early Showa series, but the lesser of two evils compared to the Wolfman.

According to Shizuo Nakajima, many drafts of the film were made in the 1970's, most of them starting out simply as short films. One of them featured a Godzilla suit that closely resembled the MosuGoji suit. The Wolfman's design was also drastically different, somewhat resembling a mummy, with a head that bears a slight resemblance to one of the Gargantuas. Another one of these short films featured the Wolfman character in battle against Baragon as well. All of the costumes made during the film's production were made by professional costume maker Fuyuki Shinada, who would go on to design the monsters in Godzilla, Mothra and King Ghidorah: Giant Monsters All-Out Attack. By 1983, production had changed and much of the monster action was re-filmed in order to create a feature-length film, featuring a new Godzilla suit that was based on the KingGoji. This is the version of the film most people have been familiar with, while the older drafts were believed to be entirely lost, with only stills surviving. However, Nakajima recently revealed some of the earlier footage and stated that he intended to splice together the old and new footage of the film prior to giving it a DVD release. According to Nakajima, over ten hours of raw footage for the film exists.

The radio control for Godzilla's mouth is adjusted

A colored still of Godzilla and Wolfman

One of the Godzilla suits used in the film, which bears a striking resemblance to the KingGoji

Another Godzilla suit used in the film, made to resemble the MosuGoji

The Wolfman-Human suit being prepared

Godzilla vs. Wolfman director Shizuo Nakajima poses in a cast and crew photo for Terror of MechaGodzilla

Nicolas Cage with a Godzilla vs. Wolfman poster
Add an image to this gallery 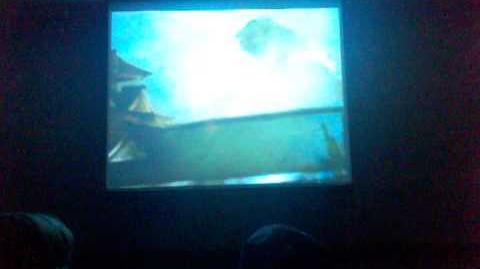 Godzilla vs. Wolfman G-Fest Footage
Add an image to this gallery

Retrieved from "https://godzilla.fandom.com/wiki/Godzilla_vs._Wolfman?oldid=291957"
Community content is available under CC-BY-SA unless otherwise noted.