Guiron (ギロン,   Giron?) is a giant knife alien kaiju created by Daiei that first appeared in the 1969 Gamera film, Gamera vs. Guiron.

Due to the lack of distinction in Japanese between the "l" and "r" sounds, Guiron is actually named after the guillotine. This is also demonstrated by the Trendmasters Guiron toy being called "Guilon."

Guiron is an alien monster that normally walks on all fours, but can also stand on two legs when the situation requires. It is an unusual looking creature, with tough gray skin, a small mouth, sleepy looking eyes and a low, groaning bellow. The most unusual feature of this beast's anatomy, however, is the gigantic blade that it sports on its head, which is nearly as long as its body. His head resembles a hammer head shark.

Guiron acted as the "guard dog" of two brain-eating space women, the last of a dead civilization on the planet Terra, and lived in a special hangar under a stream at the Terran Base. The aliens guided him with a mind control device. Before the Terrans revealed their true intentions, Guiron proved his combat prowess by effortlessly killing a Space Gyaos, reflecting its sonic cutter beam (causing it to sever one of its own legs) and literally slicing it to pieces with his blade, proceeding to chop up its corpse like a loaf of bread after killing it. Guiron later fought Gamera, and nearly killed him as well, before returning to base. After the two kids activated the doors to Guiron's home, he once again came back from below ground, and destroyed the Terran Base. The fire given off by the burning buildings revived and attracted Gamera, who challenged Guiron to continue the fight. After a long fight, Gamera eventually managed to defeat the knife headed beast by flipping him upside down - his blade stuck in the earth - then igniting a missile that had gotten stuck in his circular indents, blowing off the upper half of his body and killing him.

Guiron is mostly a melee-oriented kaiju. Almost all of his abilities revolve around the massive blade he sports on his forehead. It is strong enough to reflect a blast from a Space Gyaos and cut Gamera's shell. When he can't use his blade Guiron resorts to his secondary attack, a pair of four shurikens stored in two circular indents in the blade. Guiron can guide these shurikens using telepathic waves. They were sharp enough to cut right through Gamera's arms and lacerate his temples to the point of unconsciousness. In addition, despite his bulky appearance, Guiron can be extremely agile in battle, as noticed when he was able to leap high, for 1,300 meters, into the air to take down Space Gyaos. Guiron's eyes have a 360 degree field of view.

In an anatomical illustraion, Guiron was said to possess poison within its body.

To better serve his role, Guiron's roars almost sound dog-like, consisting of low growls and resonant roars. After Guiron kills the Space Gyaos by beheading it, he can also be heard making a low, guttural laugh.

These roars were later used for the Allosaurus in the BBC television show , Walking with Dinosaurs. 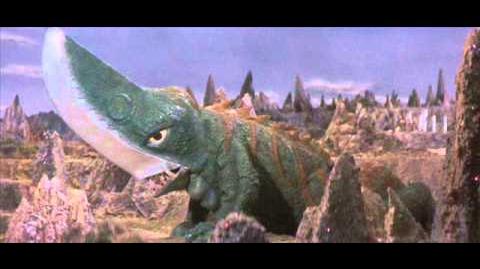