In the early 2030s, a new material called Texmexium (more powerful than nuclear energy) enabled the world to be controlled by a new generation of super computers. Due to fear of misusing Texmexium, it was guarded within hyper-nuclear facilities that powered every major city. Concurrently occurring was the world's depletion in raw materials to create new all-powerful computers; conductive plastics and computer chips have out-valued gold and gave rise to tech scavengers that seek their fortunes through acquiring and selling computer parts despite the extreme dangers.

During the year 2005, the Cybortech Company built one of the most advanced robotics development facilities upon a small Asian island simply called 8JO. Controlled by a highly advanced A.I.system, Kyron-5, the A.I. autonomously ran the island for 20 years until it come to realize humanity wasn't needed and began to use their own technologies to rebel against humanity; the great robot war began. To quell Kyron-5's insurrection, the allied powers dispatched a GUNHED battalion in attempt to stop Kyron-5, however, it was being protected by a powerful guardian, Aerobot. The battalion was defeated and all of its remains were thrown in a scrap yard. The conflict never had a clear victor, but the world allies chose to leave 8JO alone, it would be 13 years later for anyone to discover Kyron-5's survival and true intentions.

The year is now 2038, the scavenger crew of the Mary Ann has infiltrated 8JO and begins their mission to scavenge computer chips. Captain Bansho, Brooklyn, Babe, Barabbas, and Bombbay infiltrated the lower decks while Boomerang and Boxer monitored things near the Mary Ann. Not long, Boxer and Boomerang gets killed by the automated defenses on the landing pad. As the infiltration team heads deeper into Kyron-5, Bansho and Barabbas are killed inside the elevator as the defenses attacked them. Brooklyn, Babe, and Bombbay managed to survive the assault and bumped into an injured Texas Air Ranger, Sgt Nim.

Nim was on a mission with her partner to hunt down a Bio-Droid that stole a vial of Texmexium for Kyron-5, but her helicopter was destroyed and her partner killed in action. Nim herself was injured and Brooklyn helped her. The four traveled together in safety, but Bombbay is shortly killed by the droid Nim was hunting. The surviving trio made it to Kyron-5's core room, where they found a vial of Texmexium; the Bio-Droid wanted it back. While fighting for the Texmexium, Babe fell into a vat of chemicals along with the droid. Brooklyn and Nim considers her dead, but she actually somehow merged with the droid as a single conflicting entity. As the only two survivors, Brooklyn wants to keep the Texmexium because it cost him his comrades, but Nim wanted it to complete her mission; both objectives would have to put on hold as they encountered Aerobot.

The two survived their encounter with Aerobot by escaping into a deep chute, to be discovered by the sole surviving children of the original human custodians of Kyron-5, Seven (younger brother) and Eleven (mute older sister). Together, they formulated a plan to get back on the landing pad of Kyron-5 and escape with the Mary Ann, but their situation is hampered by both Kyron-5 and the Bio-Droid after them. However, it was by chance, at the robot graveyard, that Brooklyn found the remains of a GUNHED (Gun UNit of Heavy Eliminate Device).

Using his technical skills, Brooklyn brought GUNHED back online and it was through GUNHED that the crew learned that Kyron-5 only stopped conflicting with humanity 13 years ago to wait for them to complete developing Texmexium for its plans for global domination. Despite learning the threat it could pose against humanity, Nim was focused only on her mission and leaving the facility. Nim and Eleven left together for the Kyron-5 core room, while Seven stayed with Brooklyn to complete repairs on GUNHED and used it to escape Kyron-5. Brooklyn has personal anxieties about piloting, but he had to overcome it to survive. It was while during her leave that the droid found her and retaken the Texmexium to aid Kyron-5's plan.

With the aid of GUNHED, Brooklyn was able to clear through the various deadly obstacles and defenses of Kyron-5. However, Aerobot remains at large. Brooklyn fought with GUNHED to take down Aerobot, but the unit defeated GUNHED. Brooklyn escaped out of the tank and rigged a part of its functional gun to manually shoot Aerobot. Brooklyn managed to take the heavy gun and finally destroy Aerobot once and for all. In between, Nim realized Eleven was part of Kyron-5's plan as it actually inserted a special activation code within her (the source of her muteness); she would uncontrollably help Kyron-5 execute its plans, however, Nim intervened and prevented her from launching the code. The Bio-Droid returned to stop everyone, but Babe realized she couldn't escape being trapped inside and decided to detonate a grenade within the droid's body to help the four escape; both the droid and Babe were destroyed.

Kyron-5's plans have failed and now it activates the self-destruction sequence to detonate 8JO. Originally only having 10 seconds, the mangled GUNHED activates its boosters to ram against Kyron-5's self-destruct sequence to give them a chance to escape within 15 mins. With just enough time to escape, the four escaped on board the Mary Ann and flew away. It was while flying away that GUNHED passed off its final message to Brooklyn, that the GUNHED Battalion completed their mission. 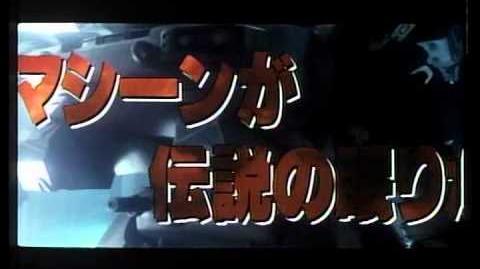 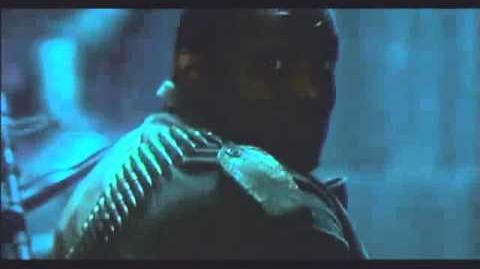 Retrieved from "https://godzilla.fandom.com/wiki/Gunhed?oldid=299461"
Community content is available under CC-BY-SA unless otherwise noted.